By Kerra aka Mizz Kayz
Published on 10-Apr-10
PAAAAAAAAALANNNNNNCE! First official band launch of the season and Tribal Knights was ready to dazzle your eyes! Caribana jumbies were out in dozen's, all gathered around the stage patiently anticipating the launch of Dexter's 2010 costumes. The exictement ...
>> View 2010 Tribal Knights Band Launch "Hollywood: Glamour & Glitz" Gallery 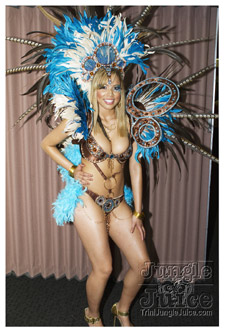 CROWD:
PAAAAAAAAALANNNNNNCE! First official band launch of the season and Tribal Knights was ready to dazzle your eyes! Caribana jumbies were out in dozen's, all gathered around the stage patiently anticipating the launch of Dexter's 2010 costumes. The exictement filled up the room as we all waited to experience "Hollywood!"

VENUE/ACCESSIBILITY:
This is the first time TJJ has been to this venue and we were impressed! It was the perfect location for a band launch. There was a nice, long catwalk making it easy for the Caribana jumbies to get a close look at all the beautiful costumes. The lighting was set up jusr right, ensuring the stage had a bright spotlight. Parking was a bit hectic but everyone managed to make their own spot - lol!

VIBES:
Music for the night was provided by Toronto's best dj's : SOCA SWEETNESS, MARXMAN, JASON CHAMBERS, GOLDFINGER, LOUD MOUT CHINEY and Toronto's bess mc E-Man ran the show. One of Florida's best dj's was also in the house, big up ETERNAL VIBES for a nice set! Party-go'ers wined and grinded til about 1am when the spotlight took over the stage. One by one, Dexter's beautiful models graced the stage portraying section by section. The section's included : Paparazzi (black and silver), Champagne on Ice (gold, green and yellow), Indulgence (blue and brown), Glitz (white and silver), Glamour (blue and purple), Moulin Rouge (red), Arabian Knights (blue and gold), Rodeo Dreams (pink and yellow) and Showtime (orange and green).
The costumes lit up the room with each shiny bead and colourful accent and the crowd ooed and ahhed until the last model came down the runway. Once the show was finished, music was back to full blast and the party continued like it never stopped. You got a two in one combo - fete and show - thas how it should be done - ent?! lol

FOOD & DRINKS:
Since this venue wasn't a club-type setting, there was a chit system to acquire your adult beverages. You bought your chits and went to the bar where 3 bartenders served you. Now everybody know's westindians love to drink so there was always a line up at the bar. Fortunately it moved quickly and we weren't left parched for long periods at a time.

SERVICE:
Security and staff were friendly and all party-go'ers were safe and sound for the night. No real complaints!

COST/VALUE:
All masqueraders were free before 11pm so alot of people arrived before that time...after 11pm, entry was between $15-$20. Now, although there were no artists performing, for $15 you got a fashion show vibe...which wasn't too bad!