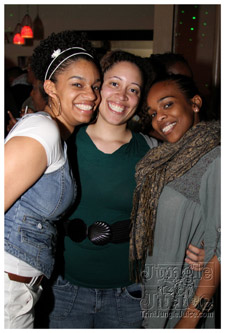 CROWD:
The crowd was a little static at first like they couldn't remember the tunes from the 90's, but after a while they remembered and got into the grove. Everyone was dressed nicely, but few came out in their 90's throw back wear. I did see a few that ventured deep into the chester draw in the basement and pulled out the atari tshirts, the mis-match colours and the throwback kicks. I have to say I wanted to see alot more 90's outfits and hair styles, maybe next year.

VENUE/ACCESSIBILITY:
The Library Bar and Grill seemed to have had some new lights that gave it a little disco feel to it, which was really nice. The Size of the place was more than enough to accommodate the turn out. If you got there a little late parking may have been a little difficult but not too bad.

VIBES:
As I said earlier the crowd was a little static at first like they playing shy to buss out the running man. Maybe the drinks weren't flowing for them, maybe they forgot it, but thankfully the pace picked up a little later (in true Washington DC style) and they got moving, which lead to a fairly decent night.

SERVICE:
Service was absolutely great, the bartenders very vigilant and quick to respond. I had to send a big up to the bartender named "Bingo" (who knows this man rehl name? he held it down behind the bar.