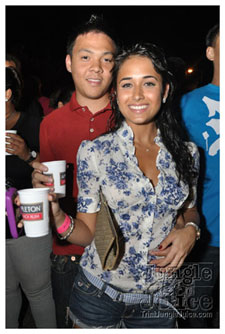 CROWD:
Well, well ... well. TJJ touch down at 2010's installment of Frenchmen's Blocko and the crowd definitely was a sight to behold ... tons of sexy, beautiful mature women in our midst. Ooh La La! There were your few youngsters here and there, but not in any significant amounts.  Not only was there plenty eye candy, but it was also quite a large crowd in attendance. Dance sell off!! During our many trips through the crowd, we came across some of our loved Caribbean artistes such as Shurwayne Winchester and Sean "Dutty Rock" Paul, who were both indulging in the night's festivities.

VENUE/ACCESSIBILITY:
The venue was located in the residential area of Jacks Hill, where a big chunk of Braywick Road was blocked off to serve as tonight's stomping grounds. Security and traffic management was in full effect, ensuring that there was always free movement on the roads, and that shuttle turn around time was at a minimal.

VIBES:
The fete fell on a work/school night, however that didn't dampen spirits much at all because all after two o'clock in the AM, the fete was still filled with patrons who were partying hard, and best of all .... without a sign of worry on their faces. Smoke & Delano of the Renaissance Disco were in charge of controlling the musical set tonight. They kept the sweet sounds of Soca pumping all night long (with a touch of dancehall - which is one thing a lot of folks love about Carnival in JA), and even had the assistance of TnT's Mr. Slaughter, who brought his special touch and talents to the DJ tent. Of course, Slaughter and TJJ TV (airing in May) had to represent.

FOOD & DRINKS:
There were two well stocked bars located on either end of the party. If you were a drinker of Heineken, then tonight was your lucky night! You could have ALL the Heine you wanted for FREEEEEEEE!! The rest of drinks were on sale via a chit system. Ony the other hand, if you were looking to grab a bite to eat, food was also available on the premise. Taking a short stroll down a driveway, closer to the middle of the fete, took you there. The spic & span, squeaky clean, washroom facilities were also down this avenue. Not to be taken literally, but you could of eaten off the floor in these port-a-potties, fuss they were clean!

SERVICE:
The service was up to par ... Frenchmen reputation is based on their excellent service. Smooth shuttle operations, an efficient bar, tasty foods and very pleasant washroom facilities. Not much more we could ask for.