Port-au-Prince, Haiti –  Friday 7th May 2010. An awards programme which seeks to identify, reward and cultivate entrepreneurs whose business initiative can give Haiti new economic foundations, was launched this week by Digicel, in association with the Clinton Global Initiative (CGI).

“Recognising entrepreneurial spirit through acclaiming successes is a key driver in building an enterprise economy,” said Mr. Denis O’Brien, Chairman, Digicel Group. “That’s why we have created The Digicel Entrepreneur of the Year Awards Programme, with a fitting theme Ignite the Spirit of Enterprise; and the vision it embraces is nothing less than a thoroughly regenerated, newly modernised, enterprise-driven Haiti,” he added.

Nominations are now invited from across six categories: Tourism and Culture, The Environment, Food and Agriculture, Industry, Services and Emerging Entrepreneurs. A nominee must be the founder/owner of the business and have a full, active interest in the company. Entrepreneurs can be nominated by anyone, including themselves.

A judging panel of eight, chaired by Denis O’Brien, will evaluate nominations according to strict criteria, including the company’s strategic direction, record of innovation, financial performance, and importantly, community impact (full panel listed below).

A shortlist of nominees will be selected in each of four regions across Haiti and finals will take place in each. A total of 24 will emerge as national finalists to become part of a celebration journey and will take centre stage in the National Final in December. One national winner will be announced in each category, and from these, one will be crowned the 2010 Digicel Entrepreneur of the Year.

“There could be no more fitting or dramatic setting for the final of the Digicel Entrepreneur of the Year awards in December, than the iconic Marché de Fer or Iron Market in Port-au-Prince which was built in 1889 as a symbol of Haiti’s traditional trading prowess. Its phoenix-like renewal will represent a promise to the people of Haiti that good things can come out of appalling adversity – fostered by a powerful coalition of local spirit and international goodwill”, said O’Brien. 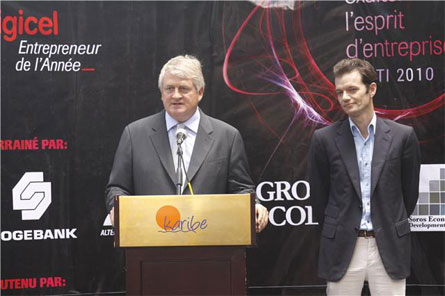 Through the programme, the aim is that entrepreneurs work together for the first time in a manner that allows them to benefit from shared learning experiences, to focus on scalability, and to look outside Haiti to the international marketplace for future growth.

The 24 finalists will be given the opportunity to engage in a three-day Executive Education Programme at Florida International University in Miami. This CEO Retreat will deliver training in leadership, innovation and strategy.

The Digicel Entrepreneur of the Year is sponsored by AIC Insurance, Sogebank, Coles Group and The Soros Foundation, it is supported by The Chamber of Commerce and Industry Haiti, The Centre for Free Enterprise and Democracy, Le Nouvelliste and Le Matin.

Nominations for the Digicel Entrepreneur of the Year Programme must be submitted using the official nomination form or via www.digicelhaitientrepreneur.com by Friday, 11th June 2010.

After eight years of operation, Digicel has 9.1 million customers across its Caribbean and Central American markets and is renowned for competitive rates, unbeatable coverage, superior customer care, a wide variety of products and services and state-of-the-art handsets. By offering innovative wireless services and community support, Digicel has become a leading brand in the Caribbean and has placed the region at the cutting-edge of wireless communications. The company is also a recent entrant to the Central American market in Panama and Honduras, where is has 1.6 million subscribers.

In total, across its 32 markets, Digicel has over 10.7 million subscribers.

Digicel is the lead sponsor of Caribbean and Central American sports teams, including the West Indies Cricket Team and Special Olympics teams throughout the region. Digicel is also the title sponsor of the Digicel Caribbean Championships and the Copa de Naciones Digicel, which are the Caribbean and Central American qualifiers to the CONCACAF Gold Cup. And in the Pacific, Digicel is the proud sponsor of several national rugby teams including the Digicel Fiji 7s, Digicel Tonga Ikale Tahi 7s and 15s and the Digicel Vanuatu 7s and 15s. Digicel also sponsors the Vanuatu Cricket team.