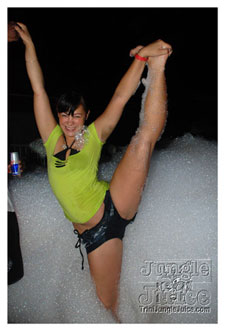 This year Swanky’s annual Foam Fete found a new home on the beach at the Ramada Grand Caymanian Resort. And guess where Team TJJ happens to be staying? Yes correct... the Ramada! Right nice, so we don’t have to far to ‘toe drag’ if alcohol gets the better of us tonight!! ;-)

Catching the tail end of the Spirit Of Batabano Cocktail Competition, we already got a nice head start thanks to our special friend Appleton. But food was on the agenda! KFC? Notttttt! Our Batabano hostess, Delifa, took us to the righteous spot in the island ... Singh’s Roti Shop!! Two chicken roti, slight pepper to go please.

So, it’s around midnight and we’re back at the hotel. With the crowd still trickling into the fete, we decided to catch up with good friend and promoter, Mr. Swanky Int’l himself. And after welcoming us to the island, he broke the bad news that the party (which we later found out meant the bar) was going to close off at 1AM instead of the carded 2AM. Say no more… wap wap, A is for “Action”! PSI Juice put down her food in the room, and I downs my roti and cherry juice (which almost got stolen) in two two’s ... and it was time to get to work. TJJ TV ... mic check 1, 2!

One thing we love about Carnivals in the Caribbean are the venues … you can never beat feting on a beach or on a boat cruising through the blue Caribbean Sea! Tonight we on a beach!! On the inside, a hand full of folks were jammin’ in the foam (big up the T-Dot crew that came to Cayman to party hard), while most partygoers were more focused on getting their drink on before the bar locked off. And we doh blame dem! There were lots of familiar faces, including a whole squad from JA who we recently bounced up in Bacchanal Jamaica (shout out to Trudi), and none other than, Shurwayne Winchester and his band Y.O.U (in town for their big Friday night show “Represent”) all just enjoying the Batabano vibes.

The party had its spurts of jamishness, but would have been even sweeter if everyone just did less socializing outside the foam and more feting inside the bubbles! :-) Shout out to DJ Eternal Vibes outta Miami but reppin’ TnT, for holding down the musical vibes throughout the night as Swanky worked the crowd on the mic. Shurwayne later blessed the mic, and it wasn’t too long before everyone “palanced” as the foam continued to pour on. What is it about sexy women dancing in foam?? Hummm...

Swanky’s Foam Fete is definitely the place to be on Carnival Thursday night!

Still deciding if to shampoo meh hair in de foam,
Dre aka The Carnival Ref!