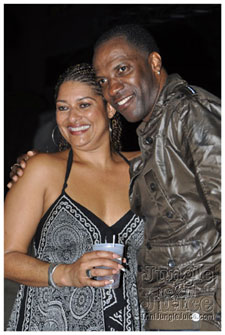 Before I could even eat breakfast, Delfia (Batabano committee) scooped me up at the hotel and we headed downtown to Radio Cayman to join host Sterling Dwayne Ebanks for his premier daytime talk show “Talk Today”. Accompanied by Cayman Carnival Batabano Chairman Donna Myrie-Stephen and Anne Mason with the CaymanFreePress, the mission was simple … to let the Cayman Islands & the rest of the world know that Cayman Carnival Batabano was indeed here!

Tonight, T&T’s soca star Shurwayne Winchester & Y.O.U (Yes One Unit) was taking center stage at the Historic Library Lot – Carnival Capital, and we were urging everyone to come out and represent their country. After lunch, we joined up with the artiste himself, hitting up the airwaves of some of the island’s top radio stations. Shout outs to DJ XS (Vibe 98.9 FM) and DJ Silver Fox (Radio Cayman). Winchester told everyone to expect an energetic and dynamic show, and was particularly looking forward to performing for the ladies.

After a quick sound check at the venue around 5pm, we made two other stops - Block-O ‘The Original Pan Yard’ and the 5th Annual Song Competition – before heading back to the hotel to take a fresh and get ready for the night’s main event.

11:30pm … and we’ve been spinning around in circles, lost! Yes, the island small … but fuss it have plenty of round-a-abouts!! Lucky for us, we pulled up to the venue as the MC was introducing the band, which we also heard (in sync) over the radio thanks to Radio Cayman’s live broadcast. It was time to release the energy!!

The parking lot was nicely transformed into a concert/party venue, with an elevated main stage furthest from the main entrance, a lengthy drinks bar towards the front, and food vendors serving up all your favourite local dishes (jerk, curry, creole and more) along the side rear-end. Backstage was the artists’ tent, which was all highly secured. So venue, food & drink all intact! Let’s talk about the vibe.

Shurwayne is known for his high energy performances, and tonight was no different. He had the crowd jumpin’, wavin’ and winin’ from the get go to his Road March classics “The Band Coming” (2004) and “Dead or Alive” (2005), before even getting to his 2010 hits such as “Jammaz”, “Murdah” and “Chippin” (his combination with Y.O.U frontline singer Prestan). Winchester showed the band’s range as they took the crowd on a little reggae joyride singing tracks such as “Bonafide Love (Movie Star)” and Born Jamericans’ popular “Boom Shak-a-Tack” before working their way to Gyptian’s 2010 mega hit “Hold You”. But it was hearing Shurwayne sing Owl City’s “Fireflies” that took the cake for us on the night!!

Now, no Shurwayne Winchester show would be complete unless he goes into the crowd and jump up with the massive… and so said, so done. The band ended their 1 ½ hour plus set with everyone “palancing” up, down, left and right throughout the Historic Library Lot to the infectious 2k10 Soca smash “Palance”.

We caught up with some fetegoers and the Batabano committee after the show to get their take on the night, and they all echoed the same sentiments… that it was a great night! “I love how Caymanians’ party!” Shurwayne later shared with us backstage.

It wasn’t too long after, that we grabbed some jerk chicken (with hard dough bread) and bounced the car starter in search of the after lime. Did somebody say Singh’s Roti Shop?

Ready for Batabano 2010,
Dre aka The Carnival Ref!