Bataba-Boom! 2010 The Official After Party Review 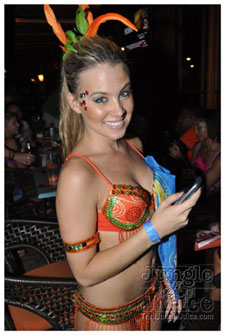 Shortly after all the 2010 Cayman Carnival Batabano awards were announced, we decided to hit up the Official Batabano After Party for Vibe 98.9FM to celebrate with ‘Band of the Year’ winner Swanky Int’l. And from we heard, there surely wasn’t a lack of parties to check out after a crazy day of Batabano.

With the vibes still building at Carnival Capital, we took a two minute walk over to Margaritaville, where the excitement never stopped. It was free admission for all Swanky Int’l members, so it wasn’t long before we got our clearance to palance!

The DJs on the bill were Neil Sam, DJ XS, DJ Alic and DJ Yoyo. When we walked in, XS from Vibe 98.5fm radio station was on the 1s and 2s playing a nice blend of music. Of course, Soca was the main course for the night! It was nonstop dancing, palancing and wining in the main room, with the limers occupying the balcony areas which remain packed throughout the night. New and old friends partied together, and if it’s one thing about the Cayman Islands, it surely has a great mix of cultures that makes it a true paradise. We were surprised to learn just how many other Caribbean folks live in Cayman.

Later on, we spent sometime in the second room, were we got some more one on one time with the sexy bartender who moved here from Tampa. Heineken, Corona, Caybrew, Jägermeister, Tequila ... you name it, we had it! And with some long arse straws too!! Note to self, consuming alcohol quickly with a straw increases the level of drunkenness. We’re not saying if that’s a good or bad ting... just putting it out there!

We made our way out around 10:15pm. This wasn’t too long after one TJJ member (COOP, we ent calling no names), wanted to know how come it was 9:45 and the sun wasn’t out as yet? Fuss it felt like we have been partying since it was 1999! With our rental parked opposite the Marquee Plaza (where the parade started), we were now in search of a ride back to our car. But something kept calling our names .... Who say food? Singh’s Roti Shop... once again to the rescue!