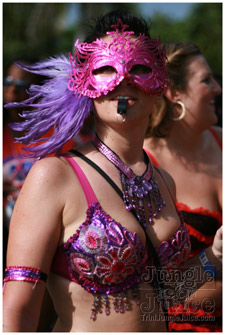 As streams of colorful beads fell from the balconies of buildings amongst the masqueraders, you knew you were in a Carnival to remember. Dancing, excitement and celebration are the three words that BEST describe this year’s Cayman Carnival Batabano.

Grand Cayman’s 2010 Carnival has grown tremendously within the past few years. Falling behind the ranks of the popular Caribbean Carnivals (Trinidad & Tobago, Barbados Crop Over, Jamaica, St. Lucia and such), Batabano is stepping up its game and growing in popularity amongst both locals and foreigners. People from all over the Caribbean, United States, Canada and even Europe come to share Cayman’s beauty and thrill (along with watching the fun loving people of the island celebrate in the festivities). This year people lined the streets in the hundreds to watch all the various bands jump in their  vibrant, colourful costumes. 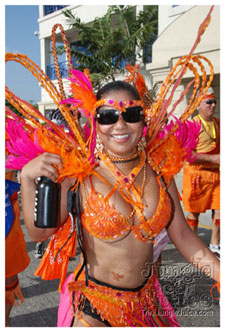 Kicking off at 3pm, the parade began at Marquee, headed down Harbour Drive and ended at the Historic Library Lot aka Carnival Capital around 6pm, leaving masqueraders craving for more fun in the sun! A word of advice, whatever you do; don't arrive late!! As TJJ always says, "When it comes to Carnival, timing is crucial! Every minute gone translates into a lost wine!!" Trinibagoian Soca artiste, Shurwayne Winchester was the lucky artist of choice for this year's Carnival. He got the crowd wining, jumping, waving and screaming for more as they palanced through Georgetown’s 6 mile road march.

As we walked filming the streets, paved with onlookers and jumpers, I realized what a beautiful place Cayman is. Observing to my left, there is a mas band blasting Soca music with everyone waving, jumping and having a blast. Then, I gaze to my right and it’s a gorgeous view of the ocean. Beauty was all around. I had to seize a moment for myself, realizing that Grand Cayman was harboring both fun and beauty in such a remote spot. Not a minute passed by and I didn’t have fun, and I had to eventually give in and put down the cameras towards the end of the parade and get in on the feting! 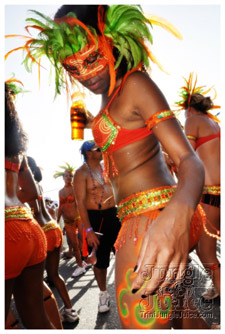 Immediately following the parade, the celebrations continued at Carnival Capital with bands & DJs pumping more Soca until midnight, which marked the end of another successful Batabano.

Swanky International took the 'Band of the Year' title with their "Mas-A-Raid 2010" presentation designed by Dexter Seusahai (Tribal Knights, Toronto) and was clearly the biggest, sexiest band on the road.  Swanky also copped the Best Individual Male (Mask of Zorro) and Best Individual Female (Geisha Princess) prizes. Congrats!  Second in the best band competition was LIME Explosion (who also had a strong following on the road) and a Reba Dilbert Creation – A Caymanian Legacy took third place.  Earl La Pierre and the Panoramers took the gong for 'Best Steel Band' with Pandemix second. Ah Sukar Warriors won 'Best Small Band and Spirit of Batabano'.