By Jevan aka Dr. Ram Dass
Published on 01-May-10
The early warm up was horrid. I don't recall the name of the sound; actually I don't want to remember the name of the sound. Those boys need to record their sets, play them back and decide if they should pack it in and go pack groceries at HiLo. 4 Words. David Rodigan King Addies. It was everything that you could ...
>> View the REAL deal Gallery 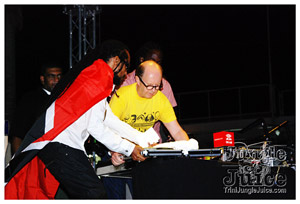 Shout to David Rodigan for representing the Chutney fans. A little sad that King Addies came to a clash with a round dedicated to vocals and didn't play Toni Braxton... really? Thanks to Titan for keeping the Sound Clash vibes alive in Trinidad, and definitely maintaining the highest level of sound systems. Thanks to Hypa Hoppa of Radioactive Nuclear for making the work of the media easier in bringing the scores to YOU.

CROWD:
Smallies were ample. Nicely packed clash. When Big selections were made, the vibes across the crowd were more than sufficient to electrify the air. Likewise, "boo's" where deafening to receiving ears and unsatisfying chunes. Perfect size and well responding which is impressive.

VENUE/ACCESSIBILITY:
St. John's Theatre aka St. Jaannns. Open air. Nice open air, Stage setup was impressive, audio quality could have been better, but was workable. Street parking is your usual Stadium scene. It's there and free but can end up walking a little if you're late. Let's just say that 'Piggy Backs' were inorder for those in improper footwear to a sound clash.

VIBES:
The early warm up was horrid. I don't recall the name of the sound; actually I don't want to remember the name of the sound. Those boys need to record their sets, play them back and decide if they should pack it in and go pack groceries at HiLo. 4 Words. David Rodigan King Addies. It was everything that you could expect. Every riddim, Every chune. Bob Andy, Alton Ellis, Bitty McLean, Gregory Issac.... MAD!!! I'm listening to the clash now as I write this on http://redbullmusicacademyradio.com/shows/2716/ and as GREAT as it is, it's just not the same as being there in person. ABSOLUTELY LOVE THE VIBES!

FOOD & DRINKS:
There was a chit system in place and I am still holding alot of pieces of paper that refect a dollar amount that is meaningless outside of the venue. The bar ran out of drinks 20mins after I walked in gates and people were real thirsty... if you're going to sell drinks... have drinks na? Not to mention that the line was insane and incredible. I couldn't get close enough to count the number of bartenders, but whatever it was... they can do better! I did see that they were selling something gera animal, but it was a little too suspect for me to go investigate. Like buying sushi from a doubles man?

SERVICE:
I held my pee and ignored the parking sprangers ...

COST/VALUE:
The box office at the venue opened late and despite being told that the price was not going to change, it did. Ended up paying more than I intended. BUT the show was still excellent and worth my money. I just had to get over the fact that I was misinformed and out a few more bills than I expected.

You can blame me however for not picking up tickets early at anyone of the scores of venues that tickets were being sold at.