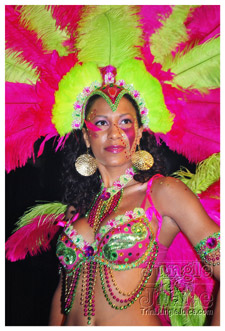 Tonight the event was at a location which can be described as a large banquet hall hence it was very hard to fill. There was no liquor licence so the crowd was subdued. The after party was held at the club formally known as Tropical Sunset.

The show was presented like a fashion show with seats all around for everyone to sit, so therefore there was no getting down to the disco 70's music that was being played.

The crowd was treated a groovy choreographed Disco Routine by a decked out "afro wearing", "sequin flashing dance crew".

Costumes were colourful and bright as expected and reflected the "Disco Fever" theme that they were aiming for.

Overall it was enjoyble show.