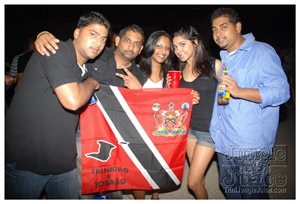 VENUE/ACCESSIBILITY:
Easy to find, plenty of parking. As an indoor venue, Mahai Temple is huge, so any crowd that is not near capacity makes the venue feel very empty. Venue was at approximately fifty percent (50%) capacity.

VIBES:
As mentioned previously, Mahai feels likes a cavernous venue if not full or close to capacity. There was certainly energy and excitement in the dance, particularly as the patrons held out hope that JW and Blaze would make their appearance. Shal Marshall put in a high energy performance, and the DJ's for the night did their best to keep the energy level high. Those patrons in attendance had a good time indeed, but the vibe was lacking due to the size of the venue. The main problem is that headliners JW and Blaze never made it to the venue (or Miami) as promised, and the promoters waited until the wee hours of the morning to make that announcement.

FOOD/DRINKS:
This was a cooler fete, so most patrons brought their stocks. Those patrons who purchased drinks from the bar inside were rewarded with relatively cheap drink prices, good quality liquor and a heavy hand from the bartenders. A variety of food was on sale from vendors inside, including curry chicken, curry goat and pelau.

SERVICE:
The non-appearance of JW and Blaze was allegedly due to factors outside of the control of the Promoters. They issued a press release from JW and Blaze after the event explaining their non-appearance, so its difficult to hold this one against the promoters.