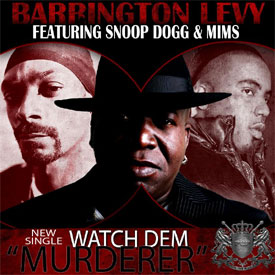 NEW YORK, NY - Platinum Camp Productions, Inc. (PcP) along with the legendary reggae superstar, Barrington Levy, announce the release of his new single "Watch Dem (Murderer)" featuring Snoop Dogg and MIMS. This track is the second single off of Mr. Levy's much awaited album, "It's About Time," set to be released later this year. Daddy Bigg$, President of PcP, worked along with Mr. Levy and Black Roses to produce this song which is dear to his heart and has a dramatic message for listeners.

The track is a modern production of the Jamaican artist's classic tune "Murderer" that aims to bring renewed attention to the crime and violence that plagues the Caribbean island. Jamaica now has one of the highest murder rates of any country in the world. The crime in the country has detrimental effects on the citizens of the island, visitors and the community as a whole. The fear of violence has caused a decrease in tourism to the gorgeous island as well as lowering morale and curbing economic prosperity for many. Barrington Levy has long been an advocate of Jamaican peace and success and longs to bring worldwide attention to this issue. Mr. Levy strives to build a strong and safe community through increased education efforts and through the arts. Snoop Dogg and MIMS are proud to be a part of this production and assist in the fight to promote a safe and successful Jamaica. This track is a followup to Levy's "No War" which aimed to bring attention to violence and fighting across the world. He chose to film the video for the track in Philadelphia, PA & Camden, NJ; two cities with skyrocketing murder/crime rates. Barrington Levy has made an effort throughout his career to bring social issues to light through his lyrics and promote positive messages for his listeners.

Mr. Levy is set to tour this summer to promote his new album "It's About Time" and spread a message of peace and unity for all. Other tracks on the album include collaborations with Damian Marley, Buju Banton, Lil Wayne, and Beres Hammond.