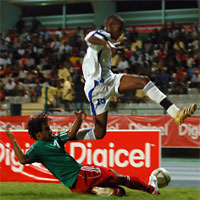 The following article was written by a female who has recently learnt the game of football.  The views expressed are not necessarily that of Digicel or the CFU.

Tuesday, September 16 -  Fort de France, Martinique:  "Let me start out by explaining that I had never been a real fan of sports, playing or watching, except of course during the World Cup and that is only because, every four years, it is the cool thing to talk about.  But since the start of 2008, I have been forced, as it were, to get into football.  It was just in February of this year that I learnt exactly what 'offside' is, though I have screamed it many a time at the TV while watching a World Cup match.

"On my first visit to the French Department: Martinique, to watch the DCC Group E matches, I got a glimpse as to what it is that makes this game of football so loved.  For the first time, I saw Martinique, who as far as I am aware, is not a popular Caribbean side; play the most beautiful football I have ever seen.  Now this is not because they scored a crazy amount of goals, no, it was solely because of the way they played the game: with amazing grace, style, teamwork and enthusiasm.

"Granted, I am a newbie to football, but I had never seen total football as I saw last night.  The Martinicans were able to fall down, yet get back up and regain possession of the ball without the use of brute force, but rather with amazing skill.  They had St. Vincent running around like lost children as they rolled the ball around the park, passing smoothly to each other, giving the game a bit of style.

"And one thing that I noticed, which I think all Caribbean teams can learn from, is this: There was no showboating.  They weren't displaying these fancy foot-works to impress a crowd and there wasn't any one player that I noticed more than any other.  The Martinicans played like a well oiled machine, working together.  Throughout their first DCC Group E match, there was rarely a lone Martinican looking for a teammate to pass to, as there was always a compatriot close by to handle things.

"I know all that I have said may seem a bit weird to many who play football or are true fanatics, but last night, for the first time, I understood what Digicel meant in their slogan: "Life!, Passion!, Football!"  Football may not have become my Life, yet, but after last night's match between Martinique and St. Vincent in the opening match of the Digicel Caribbean Championships' Group E, I am definitely feeling the Passion for this sport that so many Caribbean people live for called Football!"

Yours Truly,
A new football convert