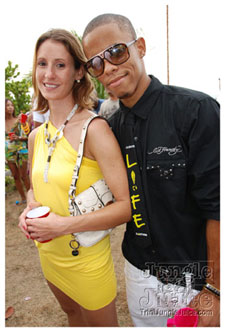 TJJ is back in Trinidad where it all began 8 years ago, we back at Blanchisseuse, we back at an actual beach house... We back at Beach House – Mayfair!!!

Beach House Mayfair was an event that was set on my calendar for some weeks now. And based on my Beach House Carnival experience on Carnival Thursday this year, I knew that my Caribbean crew from up and down de islands were going to make a special effort to fly in for this one!

Beach House has always been an experience and this one was not going to disappoint. As a true Trini you know that the experience starts from the serious lime on the road trip up to Blanchisseuse. And you know how difficult it was not to stop and join the traditional Sunday Beach limes at Maracus, Tyrico and Las Cuevas as we journeyed to Blanchisseuse. All I had to keep in mind was that the TJJ crew going to fete (ummm I mean professionally cover the event), we had a designated driver and that we could have a drink or two as we did not have to drive!

But wait... it’s not a free drinks event! I guess at US$50 who could ask for free drinks, but with the traditional Beach House clientele I’m sure they could have added US$25 to that, make it into a free drinks affair and that no one would have complained! In the end, I am still assured Beach House would have some form liquid freebies!

With customer parking at the Blanchisseuse High School, a shuttle service to the event and free Monster along the way up things were going nice so far. And you knew that the quick trip to the actual beach house came to an end with the sighting of a white 60 foot beach house sign at the drop off point. Now it’s time to palance!!! 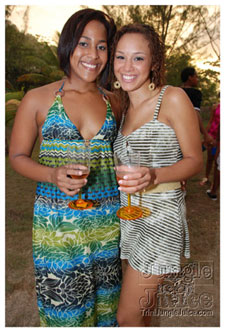 The Mayfair theme was evident from the very start with a colourful maypole decorated entrance (which had no line and was easy to get through), to the numerous Mayfair stalls that punctuated the grounds. There was free popcorn stall, cotton candy stall and a snow cone man! But who could resist taking a chance a hoopla and win a bottle of premium alcohol! You got to get your drinks somehow! Speaking of drinks there were still some free sample kiosks giving away Hennessey, Patron and Jose Cuervo just to name a few.

After I got my drink on now it was time for some food... some eye-food! With settings that can be used in any Caribbean Lifestyle magazine my ladies did everything to look the part. Their easy breezy colourful outfits fit perfectly with vibrant foliage on the well manicured grounds. The perfect atmosphere could make every pic that TJJ took easily make it into Maco Magazine!

The dance had a nice build as DJ Joy Juice held down the first session with Soca, R&B and Hip Hop. Next was Jus Jase who took us musically back in time to when we use to go to our local school Mayfair. The surprise of the night was Ishmael the Demolition Man who understood the crowd and brought us back to the future with hits from today and yesterday with an uptown twist!

Even if the music did not bring you in a frenzy your spirit was reawaken as you were baptized by a short drizzle that fell as the scheduled 8 pm close off time came. But you know what they say... if you ask you shall receive. And the Beach House crew asked for more time and they did receive as the DJ announced that de jammin’ would continue until 10 pm instead!!!

In the end with a good theme, sweet crowd and even better service, Beach House Mayfair was the event to go to on a Sunday evening.

The Appraiser & Keiron were there... where were you?