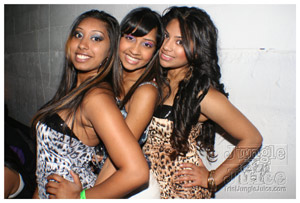 CROWD:
Being Trini 2 De Bone... late as usual, we got there around 1AM and let me tell you, the line was wayyyy down the block... A New York City block!! Thanks to the promoters we were in within 5 minutes. While heading inside I heard a rep from the club saying the show was sold out. Trying to make our way around and barely getting far, this place was 'RamJamCram'!!!! Lots of ladies, and dressed to impress I would have to say. On average, over 2,000 people.

VENUE/ACCESSIBILITY:
A little bit of a hideaway, but with big crowd making their way in, its not that hard to spot. Great choice of venue for the massive amount of partygoers, much to my surprise it was still a bit like a sauna in the larger staging area once Gyptian's performance started.

VIBES:
The crowd was grinding, wining & palancing all over, ah almost got knocked over during a large group palance pon dance floor, next time ah know to move out deh way and find a wall during that selection!!! :)

As for the DJ's... they definitely had everyone moving till da last minute and best of all, what we all came out to see GYPTIAN..... he came out, did his thing.... rocking the crowd with his smooth vibes and amazing songs!!! We had a great nite!!! :)

FOOD/DRINKS:
Took us about 20 mins of standing at the bar to get service, only because there was so many people and not enough bartenders. Then when I did order, I was told they were out of Henny & Black Label.... oh yeah, and ice... how do you run out of ice at 2AM??!! So there we were drinking a Long Island with no ice!!!

SERVICE:
As for the promoters.... YES!!! Very easy!! Great show, lots of people, entering was easy and cccess to backstage & Gyptian for some exclusive photos.... instantly granted!!!

As for the bar.... let's just say I was sober all night... not even a buzz!! Wish there were more bartenders & easier access on de rum!!!!

COST/VALUE:
Advance early tickets were $20, but they were gone within a hop, skip & jump. Tickets then went up to $25 + more at the door.