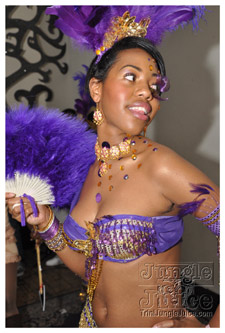 Big thanks to Melysah and the whole PUK team for all the love given to the TJJ fam tonight which made our jobs great fun!!!

CROWD:
The party took a little while to fill up and we don't know what it is about venues where it is just one big square but you always get that high school dance feel! You know the kind where everyone sticks to the edges and there is a big space in the middle of d dance! Even though it took a while for the dance to fill up, by the time the costumes came on stage the place was pretty ram! The crowd seemed to be a real mixture - some came out in their track pants, some in their sunday best! You had to search high and low for d eye candy tonight!!!

VENUE/ACCESSIBILITY:
The Cobden Club is a private members bar in Ladbroke Grove and what better place to have a launch than right in the middle of the Notting Hill carnival route!!! Just driving down the Grove gave us that carnival vibe! Roll on August! We must say how refeshing it is to be out in West London without the parking hassles of the city! The venue is split over three floors with the first floor containing a small bar and a lounge area. It was comfortable with nice decor and a relaxed vibe. Upstairs was the main room with a small stage, a larger bar and some serious heat !!! Boy we don't know about zero degrees na this was a sweat box ! lol...Everything else was in pretty good shape though! Our advice to you is go stand right under the AC convienently in front the bar :)

VIBES:
Now there is always something tricky about a band launch...firstly everyone liming in anticipation of the costumes before they really let go! Then come the costumes, then time for the party to pick up again... Party had vibes but it was a little disjointed...by the time it got going it was time to check the sexy girls and guys on stage and then to start all over again, only to be treated to another costume display 20 mins or so later!! The Costume display showed off Poison's theme for 2010 and included some beautiful designs such as Erotica, Jungle Fever and Desire from Poison's 'That's Amore'. The models did a great job showing off the costumes but in such a large venue we would have liked to see them on stage a little longer!!! Dynasty also showed off their fun costumes entitled 'Tribal Love' which we are sure will be another popular choice for 2010! Not sure how the PVc in some of the costumes will hold up if London stays as hot as it is though!!! Poison then showed off their own fun mas section 'The Gondoliers' which looked simple and comfortable for the jamming that will take place in 2010. We Must big up the Poison models who had real vibes backstage!!! Shame they couldn't filter that straight into the crowd!!!Girls and guys you made our night palancing about behind the curtains!

FOOD/DRINKS:
Both bars were fully stocked and it was pretty easy to get drinks of any kind all night despite the crowd! There didn't seem to be food anywhere but if there was it Cobden Club's own food as the venue didn't want the usual tasty Caribbean chefs!! shame!

SERVICE:
Top service from the bar staff, clean bathrooms, and even friendly bouncers! Mike the door man even got involved in a little photo taking for TJJ!!! PUK team were on hand all night with prices and info to get you set for Notting Hill and Rotterdam 2010! No complaints !

COST/VALUE:
£10 in advance is pretty standard for any London night...throw in the artists and the costume display and we would say you got yourself a good deal. Apparently it was more at the door but if yuh must be disorganised and arrive late then what yuh expect?? lol.. PUK also issued e-tickets for everyone buying in advance which made entry easy and simple with no queues.