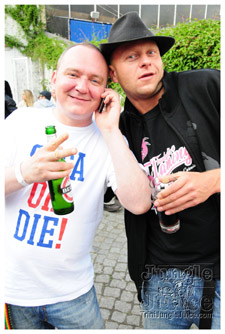 Its Saturday ... The Second Day Into The Madness ... Berlin ... yuh ready ... yuh warm ... it is getting close ... its that time of the year again ... once a year .... three days only !!! After a smashing Carnival Jump Up ... Saturday is the day to go collect your costume, try it on, make sure it fit. The guys will come to collect their jersey make sure it tight enough ... or if the sleeves needs re-adjusting aka chop it all off! The weather in Berlin is superb ... it is not hot ... it is not cold! It is what I call the perfect blend! For people like myself who are not fans of the sun, the sun is shining or should I say the day is bright but the temperature is cool ... phenomenal breeze blowing ... short pants and wife beaters ... some folks might get chills and begin to smuggle peanuts ... but it is such wonderful weather.

We are located at Festsaal Kreuzberg for the Bar-B-Que and Costume Collection for the Mas Band Fantastic Flamingos. The setting was superb and also it was based outside the venue for the party which will be held later tonight - Carnival Glow. With a bar outside the venue and the grill lighting up the chicken, steak and sausages ... patrons strolled in drank some german beers and some foreign ones, filled their bellies with some grilled meat and intermingled with their soon to be fellow masqueraders.

Heard some complaints about the chicken being pink still but overall I think the various bread and the mixture of salads followed by any sort of alcohol filled the stomachs of folks! So what was our plan ... well we arrived when most people already collected their costumes ... but there was still a good few there and still more on their way because then what happened was that Soca Twins & DJ Tate will be spinning on the decks ... and what started out as a costume and bar-b-que turned into a small outdoor disco! A shout out must be mentioned to the London posse that made it across - performing all their antics infront the concocted DJ booth ... I know that was DJ Tate's crew ... They Fresh From Yard ... Fresh!

At the end of this outdoor disco boogie shenanigan ... it was time to head back home and basically gear up for the Carnival Glow ... same venue ... same procedure as last night ... reach after 12:00 AM and leave the party last ... I have been told so much about this party that it  is beyond excitement and beyond anxiety we left  the bar-b-que feeling ... everyone kept telling us ... "wait 'til tonight" ... I guess we shall ...