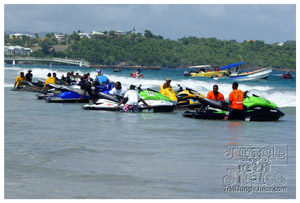 The city of "Le Diamant", located in the south of Martinique was host last weekend (Saturday and Sunday 22-23 May 2010) to a fabulous jet ski competiton, The Grand Prix Ville du Diamant - Jet Attitu'd.

The bay of this famous beach was used as part of the race track and it made for some of the best racing we have seen. A big thank you must go out to Jet Attitu'd and The City of "Le Diamant" for putting on such a great event for the riders and spectators this past weekend. For the first time we had some top pilots such as the 13 times World Champion Chris Mac Clugage from the USA and the second runner up, Jean-Christophe Prayas ... and army of 16 challengers, ready to fight on those little formula one of the seas.

Now let me take a moment to describe this Grand Prix.  Eighteen competitors on Diamond Beach, incredible weather and four of the best DJs on the island to get warm de sand.  Hundreds and hundreds of people, and some of the sexiest women in... BIKINIS, I will say it again BI.KI.NIS, make sure sunscreen is on and the cup full of liquid, just to hydrate yuhself OF COURSE, and then we .... Charge Up!!

"So what's the schedule??" 2 days of competiton! 2 days of partying! 2 days of Hydrating!!

On the first day, I decided to travel by boat, easier to skip all the traffic. On the second day, there were almost 1,500 people on the beach. But it was totally worth it, the weather was awesome on both days and the bay was breathtaking in its beauty.  It was windy however, and the sea was a bit rough. In spite of the conditions, Mac Clugage led all weekend, and the champion that he is, won three races out of four. Coming in second was a Guadeloupean, Forbin Marc, his first race in Martinique. A valorant Martinican, Concoriet Christophe came in third. Patrice Charles of Martinique finished in fourth place. I followed the race on his stand, it was a great and friendly ambiance. I would like to thank the team for their generosity. If you want to know more about the final results, check this link: http://www.jetattitud.com/uploads/media/classement_23-05-2010.pdf

Let's talk about the ambiance DE VIBEZZZZ around... Oh Geeeeezzzz! Can I say it, when it's about jet skis, you can be sure that the ladies are doing a competition too... between who have the sexiest uniform or bikinis or who scream louder, as they supported the better (or their favorite) rider! All stands were well animated, with assitants, mechanicians or fans.

The best DJs of Martinique gave us the beats between race breaks. They made a great performance and mash up the place... you could have been jealous by the fact that they kept all the sexy sponsor waitress on their stage. You could be dancing by yourself, or on an object or even with someone and you had to still look up to see them on stage!! A special shout out to my boy DJ Moulinexx who played some local songs in honour of the abolition of slavery (which was on Sat 22nd)! All crews and crews linked up, and were on the beach liming with coolers full of liquids, talking about who should win, who's riding the best, and who's that alien coming from the States, destroying the race with his class and technics!!

Final Checklist after the 2 days of competition...

There was a lot of action all day and all the riders were very happy about this event. See you at the next races!