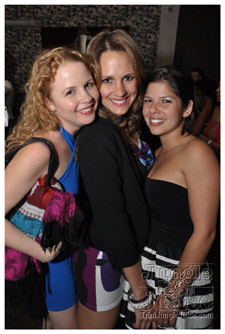 It's Busspepper's 7th Year In The Business!!! "Seven (7) years of partying and still young and fresh as ever!" Congrats and Happy Anniversary! Patrons old and new came out to show their support and jam this venue Bumper to Fender whole night!!!

CROWD:
If we told you Grace Jones was in the house would you believe us? Lol... well no she wasn't BUT remember her style, haircut, leggings etc?? Well yeah... combine that with a modern Rhianna and you get the picture! We got to say from the first look this was certainly a diverse crowd to say the least! Slowly though the usual busspepper friendly faces arrived. Not much eye candy for the ladies tonight though so Mr. Pepper we need to work on your male recruitment! :-) We know a few volunteers to help you too!!!

VENUE/ACCESSIBILITY:
Well half the TJJ team drove around for twenty (20) minutes trying to find a park and we got to say that, as appealing as the West End always sounds, if you are driving this equals a nightmare. Permit holders only and double yellow lines were the order of the night - so much so that we almost gave up! If however you were on the tube you were safe as you were just a few minutess away. The venue itself was pretty sexy with several rooms and floors to choose from depending on your mood. It took a little while to fill up which made it slightly awkward to start but once full ... it worked like a charm. We could have done without the loose tables and chairs (taking up our jammin space!!) and over conscious or should we say paranoid security but aside from that it was all good!

VIBES:
Apparently tonight was aimed to catch us off guard on the dancefloor! And boy oh boy did that work... the DJs had man surfing, girls lifting up their leg into all kinda positions, holding their heads in excitement, and some serious dutty wine to get the dance going!! This was possibly the best music we heard in a Busspepper for some time!!! We get everything from Second Class Love to Rude Boy! There were two (2) little podiums which didn't take long to get jam out and the Bajan 'wuk up' crew were definitely in the house tonight!!! We love the old school, we love the dancehall (although it was a little hardcore at time for the teeny boppers!!) we love the rap and we love the soca! Awesome!!! Nobody was standing up at all!!! Only suggestion would be maybe to close one of the rooms until it start to fill up as we would have loved those vibes from the start! Good work boys!!!

FOOD/DRINKS:
The entire top floor was dedicated to Mr. De Four and his lovely Caribbean food for which we must point out is not reflected in the score here! Hasan you would get a ten alone!!! We hear the corn soup was divine! However £4.00 for a beer? £5.00 for a bulmers? Well boy!!! Seriously overpriced drinks!! Although for some reason the spirits seemed pretty normal??? It was mainly beers and ciders that you were outta luck!!

SERVICE:
Empty your pockets, empty your bags!!! This was potentially the most anal security in the world, we thought we were in the airport! So much so that they kept the line going down the street for most of the night, causing us to think the party might buss for the first few hours!! Lol... even a little flash of a skimpy outfit couldn't distract them (yes that's right MC we saw yuh!!!). Props to Busspepper who quickly acknowledged the hold up to their fans the next day and also greeted everyone with a lovely champagne reception if you were in before 10.30pm!!!

COST/VALUE:
Usual West End prices and as far as we are concerned you can't really go out for less in the West End on a Saturday night so no complaints here! Busspepper operate both a guest list and ticketing system so you choose how organised in advance you want to be!!