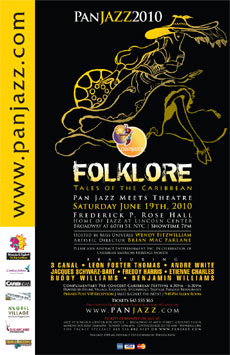 In a dramatic move into brand-new territory, the producers of the 2010 version of Pan Jazz have re-shaped the annual Father's Day weekend steel pan showcase to include such special features as former Miss Universe Wendy Fitzwilliam serving as emcee, musical input from the renowned rapso artists 3 Canal, a major theatrical element masterminded by the award-winning Trinidad Carnival designer Brian MacFarlane and the entire production formatted to the theme of "Folklore Tales of the Caribbean."

The blockbuster event - the sixth annual presentation -- will roll out Saturday, June 19 at Frederick P. Rose Hall Home of Jazz at Lincoln Center, Broadway & 60th Street, Manhattan. It commences at 7:00 PM. The steel pan talent being featured will this year highlight the next generation of dynamos of the instrument, including Leon Foster Thomas, Andre White and Freddie Harris Jr. Thomas, White and Harris have all served serious notice that they are ready to assume a place in the front ranks of pan soloists, White having also already notched his first Panorama win as arranger in the 2008 Brooklyn Panorama. Complementing musicians include the versatile horn player Etienne Charles (who is no stranger to the Pan Jazz stage), bassist Benjamin Williams, drummer Brennen Temple and saxophonist Jacques Schwarz-Bart.

The scheduling of Pan Jazz on Father's Day weekend was always a deliberate gift offering for dads and this year is no exception, with the enhancements being made to the package intended, in the words of executive producer Ralph Ramsey, "to keep it forever fresh. We are committed to doing whatever we think would ensure that it doesn't lose its attractiveness."

"Folklore Tales of the Caribbean" was in part inspired by Folklore, the title of the most recent CD release from Etienne Charles. Given form and dramatic presence via Brian MacFarlane's theatrics, mythical characters drawn primarily from the folklore of Trinidad and Tobago will provide an added dimension to the evening's musical offerings. Apart from Charles, who is expected to perform pieces from his CD, the output from other artists will similarly hew to the folkloric theme, within the jazz context that remains the core discipline of the Pan Jazz event.

Wendy Fitzwilliam, who has been named global ambassador for Pan Jazz, brings to the duties of emcee an appreciation and love for jazz that she has nurtured since in her teens. Serving as host in an environment she so thoroughly enjoys amounts to a major treat for the former Miss Universe who, as Trinidad and Tobago's representative in the pageant, captured the title in 1998.

The addition of the acclaimed 3 Canal to the mix further underscores the commitment to thematic consistency, as some of their repertoire pieces, such as "Blue" and "Salt" tend to be set in the nocturnal or occult realm. The threesome's fetching rapso deliveries have sustained their solid audience appeal pretty much wherever they appear internationally.

Another eagerly anticipated element is the input from MacFarlane, given his impressive track record in the world of design. A multiple winner of the Band of the Year award in Trinidad and Tobago's Carnival, he was also the artistic director for a cultural extravaganza arranged for delegates to the Summit of the Americas held in Port of Spain in March 2009.

Preceding the show will be a "Taste of the Caribbean Festival," from 4:30 to 6:30 PM in the Jazz at Lincoln Center Atrium. A smorgasbord of Caribbean food and drink, as well as live entertainment, will be served up to Pan Jazz ticket holders. Sponsors for this pre-show bonus feature are Tropical Paradise Restaurant, Sugarcane, Negril Village, Spoonbread and Allan's Bakery and more.

Ticket prices for Pan Jazz 2010 "Folklore Tales of the Caribbean" start at $45. Tickets may be purchased at Jazz at Lincoln Center (212-721-6500) or online at: www.panjazz.com. Pan Jazz 2010 is a production of Abstract Entertainment Inc.