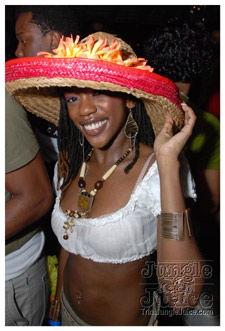 On Indian arrival day instead of staying home and eating curry (okay after we ate curry J) we ventured up to Julius’s Caesar’s luau-bashment Mai Tai. While Jules and the Caesar’s Army crew may not have invented the luau-bashment genre of fete, they have definitely perfected it. Once again, Hawaii met Trini at the breathtaking north coast venue with the perfect combination of flowing drinks and vibes that only a cooler fete can provide.

The North Deck venue is a hidden gem. It’s out of the way enough to feel like an excursion and protect the exclusivity of the party but near enough to be accessible by a short shuttle ride provided by the promoter. On Sunday the venue was transformed into a Hawaiian den of debauchery complete with Hula girls, leis and traditional Hawaiian masks all adding to this year’s Big Kahuna theme.

I t definitely was the Big Kahuna of cooler fetes. There’s nothing like the hype of the night before a holiday in sweet T&T. Needless to say the party was already swinging by the time we reached just after sunset. We only had to take two steps into the dance, literally, before we were gifted with a bottle of shots from one of the hula girls. So we hit the ground running and joined in the mayhem one time. The DJ, J-Lava kept the adrenaline levels pumping with session after session of wicked soca, pop, hip-hop and -a must in any cooler fete- skettel dub! Combine all of the vibes with girls and guys dressed in beach wear aka casual but teeny weeny outfits in some instances and… well you don’t have to imagine the level of wildness that took place, you can just browse through the pics.

Good job guys we will be back for another taste of Mai Tai next year for sure!

P.S. If ya likely to drive off the cliff after the party it may be a good idea to use the shuttles provided. We’re jus sayin’.

Teekay for the TJJ Fam.