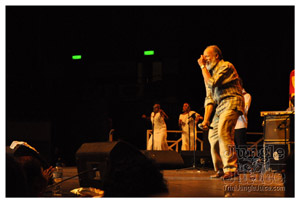 CROWD:
Vintage Reggae attracts a lot of older reggae fans, but don't get confused people, we and they had a blast.  Amongst the pretty full stadium were multitudes of couples dancing to the sweet old skool sounds, not forgetting the break out electric slide routine by a group of people in the middle (a friend's mum included).

VENUE/ACCESSIBILITY:
Everyone in Bim knows the Garfield Sobers Stadium, so location was prime and there was plenty of room for parking in and around the area.

VIBE:
Because of the general age of the crowd, people weren't going too too crazy, although there were a couple of die hard fans by the front of the stage. Marcia Griffiths brought up the tempo of the crowd, entertaining them with some classics and a few more modern covers as well as being the initiator of the electric slide.  Following on was Ernie Smith who mesmerized everyone with his energetic dancing across the stage, finishing with John Holt who also gave a great performance.  The other artists including Biggie Irie, FAB 5 and Ken Lazarus who all gave enjoyable performances.

COST:
The tickets were reasonably priced and the consensus was money well spent.