Digicel Reggae On The Hill 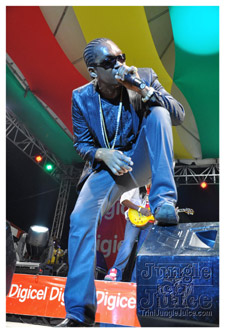 CROWD:
"The crowd on Sunday at Reggae on the Hill was intense, thousands flocked to Farley Hill on the North-East of the island to dance throughout the day and evening to some of the Caribbean's biggest reggae artists.  Some arrived in groups with packed coolers to enjoy their day on the hill under the shade of the trees, others opted for VIP where all their food and drinks for the day were cared for.  Despite the size of the crowd there didn't seem to be any problems, perhaps in part due to the high police presence.

VENUE/ACCESSIBILITY:
"Farley Hill is pretty easily accessible and the organizers had arranged a fair amount of parking attendants in the roads and fields leading up to the venue, making parking close to the stage stress free.

Originally a 19th century plantation house which entertained British royalty, Farley Hill Manor House burnt down in 1965 and was converted to Farley Hill National Park, now all that stands are the stone walls of the mansion, which acted as a backdrop to the stage."

VIBE:
"The grounds were packed with reggae fans, enjoying the sun, drinks and the sound of some great artists including; Tarrus Riley, Busy Signal, Luciano, Richie Spice, Maxi Priest etc"

SERVICE:
The staff kept the park and the bathrooms incredibly clean through out the day and there seemed to be no problems with the day running very smoothly, an impressive feat considering the number of people present.

COST:
Tickets were reasonably priced with early bird tickets at about $70 and VIP starting at around $200.  Although definitely not the cheapest thing to do on a Sunday, it was in majority opinion money really well spent.

Thanks to Kathy-Ann and Alwyn from FAS Entertainment.