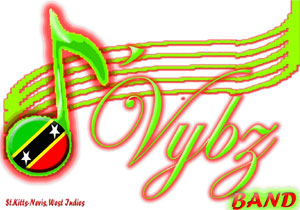 Basseterre, St. Kitts (June 11th 2010):- Grand Masters will not be the only local band at this years 14th edition of the St.Kitts Music Festival . Local music superstars Infamous and Rohlensha have both confirmed that d’Vybz will be their backing band for their much anticipated performance at this years festival.

“I love d’Vybz music but I was most attracted to their experienced musicians and energy,’ said Infamous Manager Diego Spanner . “So it was really an easy decision to approach d’vybz about working with us for the music festival,” Spanner continued

Similar sentiments were expressed by Rohlensha’s Manager Cheddi Brabshaw who indicated that getting the ideal band for his artiste was important.

“It was extremely important to get the right musicians or band to work with Rohlensa at this years fest as her performance is not only keenly anticipated by her thousands of local fans but also oversees fans who have now gotten a taste of her through her huge collaboration with reggae/dancehalls hottest artiste at the moment, Gyptian,” said Cheddi Bradshaw, CEO of Island Soul Entertainment who is overseeing Rohlensa’s music career.

According to Chad “Sucky” Benjamin d’Vybz co-bandleader his band has been practing daily with both Infamous and Rohlensa and fans of Infamus, Rohlensha and d’Vybz can expect a world class performance from all mentioned.

“d’Vybz is happy and privileged to work with 2 of our local superstars and up and coming international artistes in Infamus and Rohlensa,” said Benjamin.

The festival runs from June 24-26 and the full festival line-up was just recently announced:

Sizzla, Baby Face, d'Vybz band, Infamus, Rolhensha, C-Money and Peper Ranks will bring the curtains down on the Saturday night.

Tito Jackson, who was announced earlier as one of the artistes scheduled to perform, had to be cancelled at the last minute because he was booked for another show in Rome with the Jackson Five

d'Vybz burst unto he regional soca music scene in 2006 with hits Hello, Tun it up and Natty Dread and then followed up in 2007 and 2008 with huge hits including DJ Play and Having a Ball.