Everything "Cris" In Kingston

NEW YORK (June 11, 2010) - Following my whirlwind visit to Kingston, Jamaica last weekend - the corporate and cultural capital of the Western Caribbean - travelers can rest assured that everything is "cool and cris."

The recent civil unrest and the government's security response in the west Kingston neighborhood of Tivoli Gardens caused great concern among travel partners in the marketplace, so I was keen to see the situation firsthand and can verify that Jamaica's vibes are indeed still nice, and notwithstanding low hotel occupancies, it is business as usual in the capital.

After landing at Norman Manley International Airport on Air Jamaica's nonstop service from New York's JFK Airport, Jamaicans were assembling in their hundreds at Hope Gardens, enjoying jerk chicken, pork and seafood creations at the Appleton Estate All Jamaica Grill-Off competition - a telling indication that Jamaicans were feeling comfortable about resuming their social activities since the state's game-changing crackdown on gunmen and criminality which lasted for a few days. 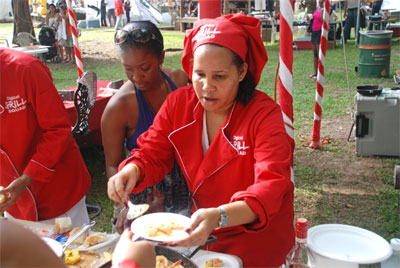 Shelly-Anne Curran, Digicel's Senior Sponsorship Manager turned Chef, serves up a shrimp offering (seasoned in a mango and pineapple marinade) at the Appleton Estate All Jamaica Grill-Off in Kingston.

"Welcome to Jamrock!" was the greeting I received from a local attorney who along with some friends from the tourism and communications fraternities collected me from the Courtleigh Hotel and Suites for a night out on the town. The next few hours were rocking - not the typical site inspection of hotels and resorts that journalists and travel agents must endure; rather, an inspection of Jamaica's restaurants and night life - from the Fiction Lounge to Christopher's Jazz Café to the Truck Stop Grill and Bar. After a few hours, it was evident, in spite of plummeting hotel occupancies, "Kingston nah go down for long."

"People are back out doing what they normally do on a Saturday night," said Deputy Director of Tourism, David Shields who took the opportunity to socialize with friends as we club-hopped and took in the dancehall vibes of Jamaica. Now in his seventh year with the Jamaica Tourist Board, Shields explained that Jamaica had embarked on a multi-tiered, multi-million dollar marketing, public relations and advertising campaign to communicate to travel partners that the tourism product and experience were not the least affected by the violence in an isolated area of the capital. 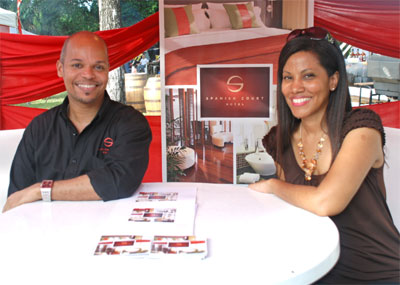 Facebook, Twitter, radio remotes, familiarization visits, press trips and advertising are each a priority for the Jamaica Tourist Board as it works feverishly to reassure past visitors, trade partners and tour operators that "every little thing is gonna be alright."

After enjoying a game of tennis and a delectable Jamaican brunch at The Jamaica Pegasus (yes with ackee and saltfish to boot!), I bumped into SuperClubs Chairman John Issa. "If you were staying at The Jamaica Pegasus and doing your business in New Kingston or uptown Kingston and you didn't read the newspapers, you wouldn't have known that there was a state of emergency and the troubles going on in west Kingston. Unfortunately, the news was widespread and it has seriously damaged forward bookings for the tourism industry and even business traffic to Kingston," he said.

While occupancies in Kingston dropped to as low as 30 percent, a bump in bookings was expected in the days ahead as Jamaica gets set to host Caribbean Fashion Week and a major manufacturing exposition.

"We have to be optimistic," said another hotel veteran Guyanese Eldon Bremner, General Manager of The Jamaica Pegasus, whose team has been busy calling clients to allay their fears. "We have to work very hard ... in conjunction with the Jamaica Tourist Board and the Jamaica Hotel and Tourist Association to recoup the lost business," said Bremner who likened Pegasus to the busy Grand Central Station of New York and predicted that the buzz will return before long. 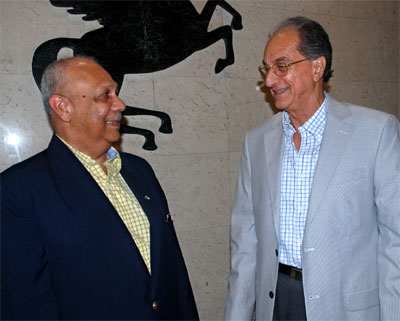 "We have to spend the time to generate the level of information to remove the doubts and fears from people's minds that the destination is not safe enough for their children and for their families," said Minister of Tourism Edmund Bartlett, who is in the United States for Caribbean Week in New York to reconnect with partners, including the Caribbean Diaspora, and advise them that activities are taking place all over Jamaica per usual.

"What really took place was an isolated incident in the inner city area of metropolitan Kingston, far removed from the tourism centers where all the excitement and leisure activities are taking place - so come on down like the thousands who have been coming," the Minister pleaded, explaining that arrivals in Montego Bay while flat for the month of May, have not dipped into negative territory. 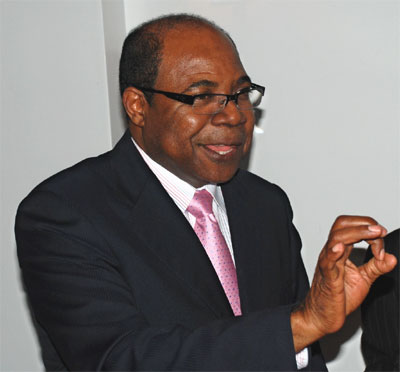 The Ministry of Tourism and the Jamaica Tourist Board are spearheading the US$10 million promotional blitz in key North American and European tourist markets to prevent a feared US$350 million loss in revenue as a result of the recent activities in west Kingston.

Bevan Springer, a New York Amsterdam News columnist who writes frequently on travel and tourism issues, is the President of the New Jersey-headquartered Marketplace Excellence Inc. - a full service, integrated marketing agency committed to excellence in the fields of public relations, marketing and media coaching. He also produces the Caribbean Media Exchange on Sustainable Tourism - CMEx.