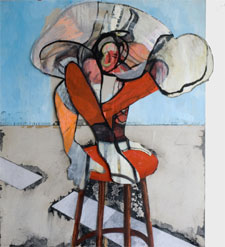 Y Art Gallery is proud to host an exhibition of recent and previously unexhibited paintings by artists Eddie Bowen and Che Lovelace.

An intensive discussion and collaboration between these two painters has been sustained for nearly two decades, this current exhibition of new or previously un-exhibited work in many ways represents their ongoing conversation related to painting.

The pair have been collaborating since the mid nineties on projects such as Studio 66a, in Newton, Port of Spain: a space which included the painting studios of both artists and became a venue for exhibitions, poetry readings and multi media performances.

Lovelace and Bowen also taught art classes together during the education program organized by Caribbean Contemporary Arts (CCA7) in the mid 2000s.

For this exhibition Lovelace will show a series of new paintings, as well as drawings, both with a strong focus on the human body and movement.

Bowen will present recent paintings inspired by the vistas of his studio located in Sans Souci, as well as, a suite of intricate drawings from his 'Architect of Impossible Physics' series.

Y Gallery is located at the corner of Warren and Taylor Streets, Woodbrook Port of Spain, and can be reached at 628-4165 or via email at yartgallerytt@gmail.com to receive more information.