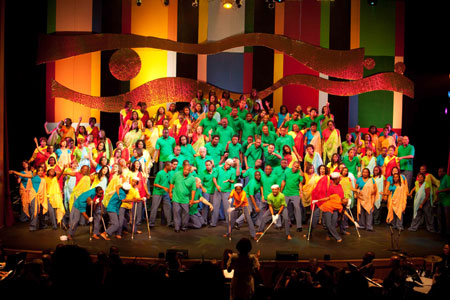 (PORT OF SPAIN, TRINIDAD & TOBAGO): This July, the Marionettes Chorale is working with local community groups and national NGOs to present a mid-year concert series with a difference. Over two weekends 2-11 July, the group will mount a series of fundraising charity concerts in Curepe, Maracas St. Joseph, Chaguanas and Port of Spain.

As is the Marionettes' hallmark, the mid-year programme will showcase their broad repertoire, ranging from popular western classical numbers, opera choruses and solos, life-affirming spirituals and gospel, Broadway, calypso and jazz - with movement by Guyanne Wilson and Noble Douglas, and live accompaniment by a small orchestra led by Leslie Clement. There will be lots of surprises and loads of fun.

The six concerts will take place:

The Chorale has a long history of working with other organizations to raise funds for charitable causes. Each year during their Christmas series, with the support of sponsors bpTT, the group hosts a special concert for the underprivileged, and hosts a gala event to raise funds and awareness for important initiatives. Last Christmas, the Marionettes raised $110,000 for the Heroes Foundation.

Concert tickets are available from the respective fundraising organisations. For more, visit the Chorale's Facebook page at www.facebook.com/marionetteschorale and their official website at www.marionetteschorale.com.

ABOUT THE MARIONETTES:
Founded in 1964, incorporated as a non-profit in 2005, and sponsored by bpTT since 1972, the Marionettes Chorale (Hummingbird Medal Gold) is one of the Caribbean's most celebrated choirs, both at home and abroad. In 1995, the Youth Chorale was formed, comprised of boys and girls from over 30 schools throughout Trinidad & Tobago who regularly share the stage with their senior counterparts. Led since 1974 by conductor Gretta Taylor, assistant musical director Susan Dore and secretary and founder member Joanne Mendes, the choirs mount at least two major productions a year, showcasing a repertoire ranging from European Renaissance to Caribbean Folk and Calypso.