D'Angel shoots video for 'Come Over' 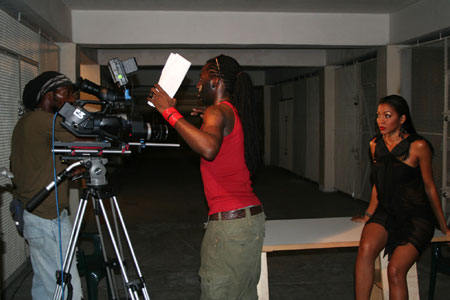 Kingston, Jamaica: June 14, 2010 :: Dancehall diva D’Angel now back in the island from her stint in New York, last Thursday shot the video for her current chart bubbler ‘Come Over’ on the Roof Top Rhythm compilation produced by Rose Gold Production.

The edgy video directed by Dexter ‘3D’ Pottinger sees D’Angel adopting the role of a female spy entangled in a web of love and espionage, interspersed with performances shots and some very fashion forward scenes courtesy of the stylist team.

The project is due for release in approximately two weeks and promises a kaleidoscope of colours as D’Angel shows why she is truly the first lady of the dancehall.