Bunji's Earthstrong Celebration Scaled Down- But Still On! 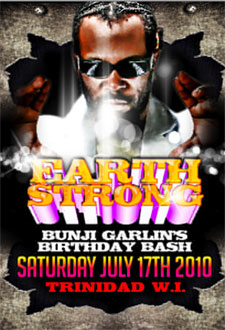 Uncertain weather conditions according to the Meteorologist’s Office in T&T has prompted a difficult decision by musical vocalist and lyricist, Bunji Garlin and the team who’s been hard at work in anticipation of The Earthstrong- Bunji Garlin’s Birthday Bash celebration carded for July 17th.

The event which is being hosted in Trinidad has been incredibly embraced online, by fans of the artiste who immediately vowed to be at the weekend long extravaganza. In this latest development however, Garlin and his team have decided to move the event indoors, to the Sting Nightclub in San Fernando, where together with a cast of local and international entertainers, a celebrity birthday bash, like no other will present itself for the masses who are expected to attend.

Previous promotion of a grand celebrity cruise on July 16th and an outdoor children’s show on Sunday, July 18th-also proved a challenge for organisers as Friday’s cruise has been cancelled due to the fear of inclement weather forecasts and the unavailability of the cruise ship at the desired time of sailing. Bunji, in a statement indicated that while he is disappointed that the children’s show could not go on as planned due to the weather fears, the anticipation for his Children’s Show in carnival 2010, could only be heightened by this unexpected development.

The Sting Nightclub is expected to be transformed to truly impress as not only will Garlin’s wife Fay Ann join him on stage on July 17th, but also Jamaican stars, Beenie Man, Busy Signal, Macka Diamond and a host of other celebrity artistes.