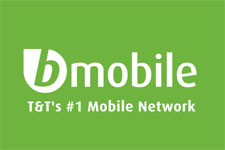 New York, NY --- TSTT, Trinidad and Tobago's largest telecommunications company, has partnered with Western Union to offer a new and easy way for friends and family overseas to communicate with their loved ones’ in Trinidad.

Now customers can simply visit one of the thousands of authorized Western Union locations in New York and the U.S. at large, where the bMobile International Sign is displayed and send minutes to bMobile users in Trinidad.

Here's how it works: Customers visit any of the 46,000 authorized Western Union retailers in NY and complete the gray prepaid services form, indicating the letters "WU" plus the bMobile cell phone number, to purchase the minutes. In approximately 30 minutes the cell phone will have increased talk time/airtime for the user in Trinidad. The cell phone owner, in Trinidad, receives a text message notifying them that their minutes have been increased on their phone.

“This service is a great convenience for those who are already familiar with Western Union, as well as for those looking for a fast and easy way to talk to loved ones overseas,” says Shavonn Doughlin, spokesperson for the campaign.

Since bMobile’s launch in Trinidad and Tobago in 2005, the brand has become the largest wireless carrier in the region, as well as one of the largest mobile telecommunications brand in the Caribbean.