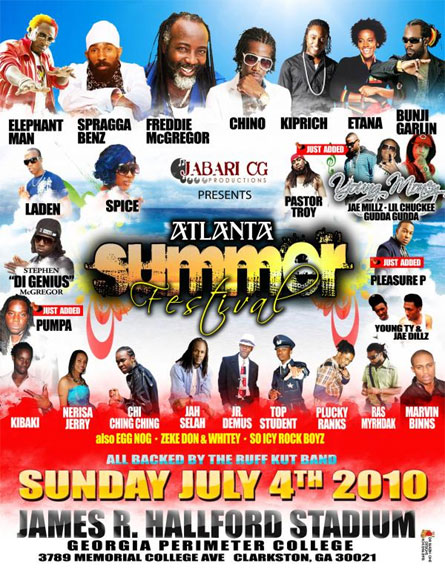 “We’ve been getting a lot of buzz for this festival,” said Stitchie of Jahbari Productions, the Festivals’ producers.  “The momentum is really moving!”  When Chino was asked about the event (while in Toronto for the capacity Best of Both World’s Concert), he smiled broadly when he said “I’m really looking forward to Atlanta!  The whole Big Ship Family is looking forward.  It ah guh mad!”

Rico Vibes of www.daflavaradio.com where radio commercials are being broadcast about the event says “I’ve been getting a lot of calls from folks interested in the show.  For the most part they’re really looking forward to the event.”

The 1st Annual Atlanta Summer Music Festival will be held on July 4th, 2010 at the James R. Hallford Stadium at 3789 Memorial College Ave (Georgia Perimeter College), and will be hosted by the Diva Nikki Z, Rico Vibes, Ron Muschette and Juggla.  Additional music will be supplied by Mix Master David, Capricorn, Killaface, Disruption and Textra.  For additional information, log on to www.atlantasummerfestival.com.