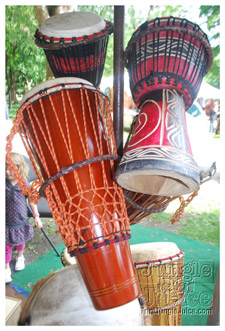 The Muhtadi International Drumming Festival (MIDF) is a not-for-profit organization that hosts a three-day annual event held in Toronto from the 3rd to 6th of June 2010. The festival celebrates the drum, its universality as an art form, and its presence in all cultures around the world.

Beginning with a gala opening on the first day of the celebration, and then taking place outdoors at Queen’s Park North, MIDF takes a journey around the world, featuring over 30 drumming groups that display the diverse cultural traditions and drumming styles from many countries.

This was something I can say I have honestly never experienced before. I have had doses of drumming from various artists around the Greater Toronto Area but nothing of this magnitude. I have to say that I was not expecting to be taken to such great heights that it made me want to dance around in a circle to all the God’s , just to express the joy that all of the artists made me feel.

The drum is like the beating of your heart and I can see in everyone’s faces that day, young and old that all our hearts were beating as one.

It was the most eclectic crowd I have seen in a long time... spending 4 months in Ohio would make you forget what a diverse city Toronto is. I was reminded quite quickly what a loving and embracing city this is. Events like this bring everyone together because everyone understands the music in mostly the same manner. You sense the beating of the drums bringing you to that place in your mind where you just let go, relax and love life as you are living it in that moment.

In addition there were a wide variety of vendors with an array of cultural garbs, jewelry, and ethnic foods.

Some of the great performances that we were all privileged to see were performed by; MUHTADI AND THE WORLD DRUMMERS (Indian, Caribbean, African, Aboriginal, and more), Amara Kanti & CO from the Ivory Coast, NJACKO BACKO, SAMBA SQUAD, TRICHY SANKARAN, NORTHERN CHINA WAIST DRUM, MARACATU NUNCA ANTES, HUMMINGBIRD TASSA* GROUP (The Hummingbird Tassa Group was started in Trinidad in 1954) and many more.

Look out for many more events put on by MIDF around the city. For more info, you can contact the Muhtadi International Drumming Festival at
9 Benson Avenue
M5G 4C6
Toronto, Ontario
t: 416-504-DRUM (3786)
e: info@muhtadidrumfest.com