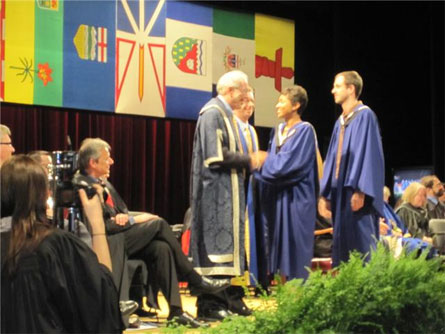 Kingston, Jamaica: June 29, 2010 :: Former television personality and Miss Teen Jamaica 2004, Naomi Cowan after departing Jamaica a few years ago to pursue tertiary studies overseas, continues to excel in the field of Television and Radio in Canada. Naomi, the daughter of gospel stars Dr. Minister Carlene Davis and Tommy Cowan and a past student of Campion College moved to Toronto in 2006 and enrolled at the Ryerson University.

In June 2010 she graduated with a Bachelor of Arts in Radio and Television broadcasting with a minor in law. During her tenure at Ryerson Naomi was determined at proving she was serious about her career, her place at Ryerson and had a clear vision of where she wanted to go in life. She received two leadership awards in her graduating year; The Dennis Mock Leadership Award & the Student Services Leadership Award. 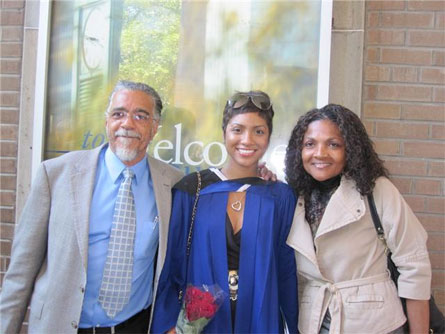 During her years at Ryerson, she served in varying and ever-increasing leadership roles in student government.
She continued her involvement with the students union and was elected by members of her faculty as Director for the Faculty of Communication and Design on the Ryerson Students Union board of directors. She followed that achievement with a successful run at the University-wide Board of Governors election where she obtained one of three student seats available. Within two years she held key positions in two of the largest decision making bodies at Ryerson. In her elected year she was also successful in gaining the position of Vice President of Public Relations for the West Indian Students Association.

The summer of 2009 was very busy for Naomi following her selection as an official spokesperson for the Scotiabank Caribana Festival. The festival is North America’s largest celebration of black and Caribbean culture and also a Canada wide representation of those communities. Naomi served in a variety of roles during the month long festival. She graced the cover of the official festival guide, which had a 50,000-distribution Canada wide including Chapters/Indigo bookstores. She then took on the role of producer and host of a video series titled “Feel De Vibe,” which aimed at increasing mainstream exposure of the more cultural and artistic aspects of the festival.
In March of 2009, Naomi successfully lobbied the Ryerson Board of Governors to pass an athletic referendum asking Ryerson Students if they would be willing to pay an additional ancillary fee in order to build a new athletic centre. After the referendum passed at the board level, she was heavily involved with planning the successful “Yes” campaign from deciding on slogans, posters and marketing strategies. 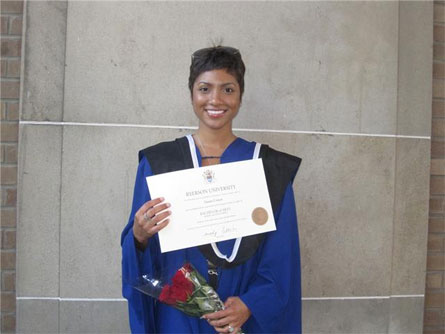 Needless to say this initiative was successful, with 74% of students voting “yes”. For her pivotal leadership role, in December of 2009 Naomi was the unanimous choice to host a live, televised press conference on CTV News announcing the $60 million refurbishing of Toronto’s beloved Maple Leafs Gardens for Loblaw’s and Ryerson University

Most recently, Ryerson University’s president, Sheldon Levy to, nominated Naomi to represent the university in the 2010 Winter Olympic Torch Relay to carry the Olympics torch in Port Colborne. On December 21st 2009 Naomi ran with the torch to the City Hall of Port Colbourne.

3)  Naomi shows off her Degree following the Graduation Ceremony.