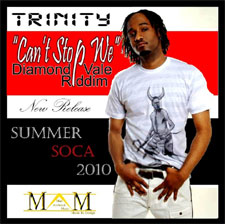 After taking a small hiatus to focus on his new family, soca recording artist Trinity is back with his latest offering for 2010. Trinity had a very successful upstart in 2006 with some break through hits throughout 2008. Promptly after entering the soca arena with such smash hits as “Got My Attention” featuring Problem Child, “Whine With You”, and the sultry ballad “Ooh”, he garnered the award of Best Male New York Artist in 2007. Not soon after, he did an impromptu song on “The Major Riddim”, which garnered him much attention in Africa, Sweden, Switzerland, London and France. It also made it to many number 1 countdown spots on internet sites worldwide. With the influx of such success, he felt it was time to take a breather and focus on perfecting his new material, emerging style and vocal range. It seems his timing was impeccable, because another successful upstart happened during that time... the birth of his son.

Trinity has teamed up with soca/reggae producer Tony “The Mad Architect” Brown to deliver the first song off of Mad Architect Music’s’ “Diamond Vale Riddim.” Entitled “Can’t Stop We”, the song is a true representation of how Trinity feels about his music, the soca industry and his new vision on life after the birth of his son. “They cannot stop good music, and soca is definitely good music”, says Trinity. “I love the fact that we did a song dedicated to Soca. How many other genres can inspire all the jumping, whining, waving... I just wanted to show my pride for my genre through the lyrics in this tune. It’s also one of my first birthday gifts to my son. This song is dedicated to him; listen closely to the intro! This is my very first pace track to be released, and I hope my present and future fans enjoy the different style I have brought to the table. I will only continue to grow from here.”

“Can’t Stop We” is officially being released for Crop Over and all US based Carnivals. Adding to the excitement around this newest smash single, it will be distributed digitally through Faluma Records, and will be available everywhere digital downloads are sold. Look out for it on your favorite digital music retailer sites. You can get a sneak peak listen at www.madarchitectmusic.com, www.faluma.com, or on this site.