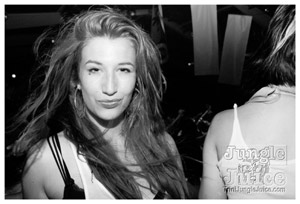 Jamrock! In 5 short years the name of Jamrock has been bombarding the dancehall scene in Holland, hosting the sickest dancehall events masterminded by DJ Waxfiend. These guys know how to set the thing off, evident in their previous parties. Top of the line entertainment with the best international artists and dj's always repine' at the XXL Editions and on this night we would be in for a threat. Gappy Ranks mister Stinkin' Rich and non other than the T that O that K were the surprise guests. Waxfiend along with Jah, Drivah and MBA led the Jamrock family's musical assault backed by Mc's Maikal X (yes the one and only newest reggae sensation) and upcoming talent Kalibwoy. My Herbalize-it crew were ofcourse on board to get the party out the blocks. So I was fully charged and ready to get my dj on and ofcourse continue testing my new camera. TJJ dey!!

CROWD:
Style ah style and then some. The ladies came out correct. Sexy and sizzling from the outside heat combined with the added musical heat. There were some fashion hits and many misses in true Jamaican dancehall pattern. Freakin Splendid. The place ram up early and it seemed that everybody was feeling good, happy to jump into the video light and camera lens.

VENUE/ACCESSIBILITY:
The venue is huge. Normally I doh like this venue for its lack of character and personality. But tonight Waxfiend has managed to get his crew to transform the place nicely into a more welcoming party friendly spot. Crazy lights, fire torches, videos screens, decorations, candy girls, girls dancing on blocks, girls in the welcome committee….yes we like! Because the location of the venue is a bit out of the city centre of Amsterdam, public transport to and especially from this place could be a hassle if u don't have a bike, car or donkey. Shuttle buses were organized so this must have been helpful. 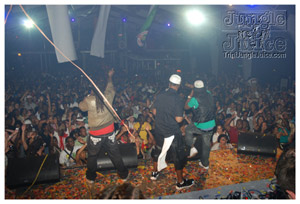 VIBES:
From start to finish, the vibes was wicked. The crowd was in the right mood, the dj's chose the right tunes at the right time. Gappy was the right artiste and T.O.K. was the right group. The energy just kept building and building up until the last couple tunes were played, it seemed like people just didn't want to leave. Niceness!

FOOD/DRINK:
Personally I didn't have a problem here but I heard some people complaining that the prices were too high, the beer was not cold and the bartenders were stingy with the alcohol. Typical complaints thus! I remember eating a chicken sandwich but have no idea where it came from or what the cost was. Yup, I was tipsy.

SERVICE:
Hats off to the security for keeping this nicely in check and the staff member who crawled under the stage to get my hard-drive that fell there when I was done dj-ing. The bartenders were quick and like i said before, I had no problem here whatsoever. Cute friendly ladies serving me drinks kinda blocks everything else out.

COST/VALUE:
Pre-sale €17,50 but was a bit more at the door. A little steep some would say but this is Amsterdam! Still, considering the dj line-up, the performance of TOK which was non stop fire from start to finish and all the little amenities Jamrock provided, I think we could safely say that this was a reasonable price.

Waxfiend yuh large for first the invitation to be a part of the celebration and second for pushin Caribbean music and culture. Looking forward to more of Jamrock me say!