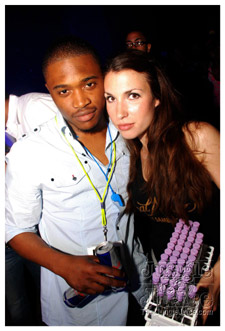 I Am Dry!!!!!! .... Not! .... it was like Caroni River flood inside Debut tonight ... the Foam from the foam machine had the patrons ... Wet... Wet ... not sweaty you know ... WWEEEETTTTT ...... Looks like this is going to be an annual event from the neXt level poisonUK family ... I concur - they should have this every year ... make sure it gets bigger, better and my good jolly golly me ... make it WETTER!!!!! Would you believe it is 20 Degrees in London? I kid you not! It is 20 Degrees PLUS in London - the damn city hot! I was relieved to know this wet fete is going to cool us down here - we need the cooling ... some people just steaming!

Debut, the venue tonight, formerly seONE - you know the venue that looks different every time - but hey! tonight it looked similar to last years layout - which is fabulous! The main area with the elevated section on the left of the stage - which by the way was hysterically lighted tonight - yes hysterically ... you could get a headache trying to watch the lights! With the two main bars in the back and all the food being served as well, you just have to follow the "rules" - if you want to get wet - go to the front ... if you want to be dry - stay in the back ... no small talk!

PoisonUK has notably been known for bringing Caribbean artistes and bands to London UK for numerous years and this year was not different however surprisingly bringing Dil-E-Nadan  - and not just singers you know ... the entire bloody band! Kudos & Thumbs Up! The performance from this unique but highly charged up band was highly received by the patrons - they delivered hit after hit accompanied by various antics which provided the creme-de-la-creme to their performance and presentation. Before the main artistes performed on the stage there was a mini orgasmic performance from Nikisha Reyes-Pile - I swear she bubble her batty on the stage ... my jaw dropped! I was not expecting it ... I still don't know what song she sang .. I was just gaping! 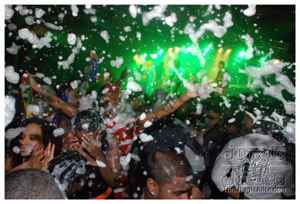 This section of my report goes out to K-Marvel ... folks ... ahem ... sighs ... Mister Man decide nah foam is not enough! no! Dil-E-Nadan is not enough! No! The Small Costume Presentation was not enough! NO! The various DJs on the night and the constant dancing and wining and interacting with people could never be enough! Never! What Else Can He Possible Come Up With?!?!?!? .... A Wining Competition!! Four (4) humans came up on the stage in their spiritually foam immersed outfits to challenge one another for who have the loosest waistline in the dance and for the chance to win a hamper of goodies! Round 1 ... we dance, we laugh , we say yeah these humans have waist! Round 2 ... oh gosh it getting competitive ... one human wining on a next human and trying to out-wine the competition ... Pause ... K-Marvel ... give the crowd the voting option! Not Enough! Round 3 ... "Attitude Gyal , One Ah Them, Two Ah Dem ...." you know the tune .... well boy ... one human PICK UP another human .. and they start to cat spraddle and jirate and basically WINE THE DUTTINESS .... who say she ain't win?? No Pictures folks ... too graphic for the teenage eyes ...

Well folks lets stick a fork in the pie and call that the end of 20 Degrees PoisonUK's annual Wet Fete - it was superficially sexy and stunning - it had its highlights - there was the soothing noisy atmosphere of a great party where any patron could beat their inner congo drums and dance in the land of humbles ... patrons exercised their rights to create a party fever and have it soaked and cooled down by the foam ... tonight ... NO DISAPPOINTMENTS!

I look forward to the Boiling Point Concert and definitely the entertainment factor of PoisonUK for Notting Hill 2010.

Scorn Juice
... worth the bitter after taste