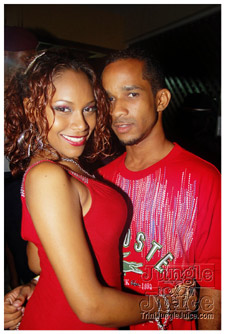 Unfaithful is one of the annual parties that has to be one of my favorites, because of its concept. We as Trinbagonians love....and I mean LOVE ah bachannal, and this party's concept has bachannal written all over it. Basically, patrons are allowed to portray their relationship status in the form of colors; Green (Single), Yellow (Married) or Red (Hornin', also known as cheating or being unfaithful). Here's where the concept gets juicy. Some patrons, knowing their real status always choose to come in a color that is the opposite, so in a sense, you never know who is who. And with that being said, this year was no different.

Numbers of people arrived to Pier 1 either fully attired in their whether it be their true status or not, while others just came straight out gorgeous. But wait...who say cooler fete? Now to my knowledge, i know there's either a cooler fete, where you can come with your outside drinks, and if you want anything extra, you can purchase it at the bar, or a free drinks party, where the bar is basically at your disposal. Never in all my event covering have I ever been to a ""Free Drinks Cooler Party"" Meaning that even though, the bar is at your disposal, you are still allowed to bring your outside drinks. Thumbs up! Some came with their coolers, some stormed the bar, DRINKS CAH DONE!

With the masses of people, was hardly able to spot any celebs, or anyone important in that matter, but i guess that was my bad, should have combed the premises a bit harder. Did I mention there was a boat ride as well? VIP patrons were treated to a boat ride that set sail at 11 P.M and returned close to 3 or 4 o'clock that morning. Unfortunately, I missed the boat *sobs* Undoubtedly, I'm sure it must've been a treat.

Pier 1 Chaguaramas......home to some of the best parties, and Unfaithful was no disappointment. Once again, the venue was filled to the brim with patrons, as well as had patrons outside still purchasing tickets....yes you heard right, even though the party seemed like it couldn't get any better, patrons were allowed to purchase their tickets right outside. Good news for last minute ticket purchasers, bad news for scalpers. As far as the ambiance inside the venue goes, two words: PURE VIBES. From the time you enter and the dj's music hits your ear, and you look around and see the patrons who are representing their so called status, you know you're in Unfaithful.

Now I swore after I spoke on both the venue and the crowd, I wouldn't need to speak about the vibes because, whether you've been to other Unfaithful events, or this was going to be your first experience, the vibe the promoters were advertising were, in the simplest of words, appealing. You could not change it on any one of the youthful radio stations and not here an announcer promote or endorse the Unfaithful event. Must say, good job on the marketing team for this event. Now, to the event. When you have a party that's name sells for itself, and put in free drinks as well as a cooler fete, of course it's gonna be successful where vibes is concerned.

People danced, drank, screamed, sung....all in all had a good time that time. There was also a live performance the young, talented and fast rising local artist Swappi as well as Jamaica's young voice (literally) Popcaan, who had the crowd in a frenzy singing tune after tune. "Wah Gwan Popcaaan?!!"

"Unfaithful.....FRIENDS!!!! Must firstly say a shout out to Shal S Dot Marshall, for making it possible for us at TJJ to cover such a great event. Also to Marvin Walters (Jah Bami), Keron Boodoosingh and all members of the IRS Promotions family. Keep up the great work. Who say Till Drunk?!!