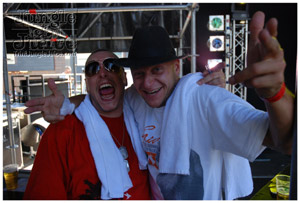 This festival was supposed to be a sweet warm-up for the Machel show the following week in  Amsterdam. Denise Belfon was expected to perform and sauce up the event with sexy Trini soca. Well, no Denise on this day and a few days before Machel's show the promoter pulled the plug for reasons I can't mention. Steuuups!

Nevertheless, on this hot, hot Sunday evening in Almere where it felt like it must have been more than 40 degrees celsius, performances were expected by T-Vice, Philip Monteiro, Ephrem J, Nyali, Royal Roots Band, Salsa dancers and our very own Dil e Nidan offering a bit of consolation to the Dutch Soca Lovers crew who came out to hear their soca. Fanton Mojah was also expected to perform  but was also cancelled and replaced by Natty King. Mad respect to Natty! The driver sent to the airport in Amsterdam supposedly couldn't find him and left Natty, who then got on the train and found the venue on his own. I am still amazed by this and wonder how many artists would have done the same. What you guys think?

Dj's for the the day were Soca Twins, East African Sounds and my Herbalize-it crew.

The artists that took to the stage all had nice performances, and gave 100%. However, it was way too hot to stand in the middle of that square and enjoy or even concentrate on what was taking place on that stage. It seemed like it was impossible to build vibes and the heat kept most people away from coming too close to the podium. Honestly I couldn't wait for the day to be over, to leave and finally see my bed after being on the road for a few days.

The festival dragged on. Soca Twins did their thing as usual and managed to get a rise out of the crowd but the volume of the music was way too soft and the following band began doing their soundcheck  annoying “1,2, test, test” killing the Soca Twins set. Then all of a sudden, Dil E Nidan came onto the stage, and all I can say is these guys made me proud to be a Trinidadian. In a matter of minutes, it seemed as if we were at a completely different festival. I never saw this group perform before, but let me tell you, everything said about these fellas is absolutely true. Their style is awesome; a fusion of various musical styles blended smoothly together to form a wicked and unique Caribbean flavour.  It was just what this lazy dehydrated festival needed. They had people singing along, jumping, waving. In short, going mad in the evening heat. Honestly, Dil E Nidan and Natty King should have been the only live artists booked on this day and Dil E Nidan given 2 or 3 hours to perform. They're just that good! 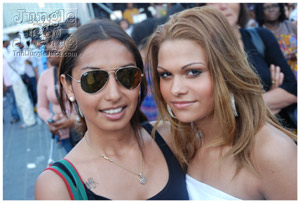 More performances followed that were less entertaining yet good and the vibe was still buzzing from Dil E Nidan's show, so that now the general attitude and energy of the festival was easy, mellow and contented. Plus, the sun began too ease up as the evening shade was ushered in. Herbalize-it took to the stage and we did what we do best. Before long the buzz was back and people were once again ready to party. Then, “1,2, test, test” and instruments being played in the background could be heard during our session. Salt! One of the most irritating things for dj's in my book. The band was setting up for Natty King's performance.

Natty King took to the stage and from the get go he was on point.  Considering his driver leaving him at the airport, and he having to train-it to the festival, his spirits and energy was flying high. Great voice, big tunes. A very under-rated performer who can roll with the very best of them, hands down!

It was a very fitting end, to a very strange day. Yet, a certainly positive end. Caribbean music took centre stage amidst the other genres and showed that we are indeed a force to be reckoned with once given the chance.

Big up the organizers for taking the initiative to put together a festival like this and especially for booking Trinidadian and other Caribbean acts. Respect to Natty King and all the artists that performed on the day. Dil E Nidan yuh large! Special shout to East African Sounds, the Soca Twins of course and my entire Herbalize-it crew!