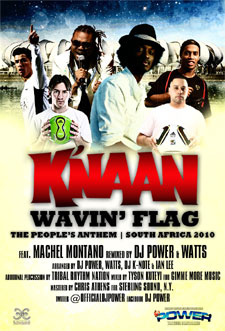 With the immense success of Knaan’s song “Waving Flag”, it was only right for it to be used as a theme song for the FIFA World Cup. Thanks to award winning remix king DJ Power & co-producer Watts, an electro style remix featuring International Soca star Machel Montano has been crafted to the number one track in 11 countries worldwide.

For a lot of people around the globe, the month of June 2010 is a time of great pride. The World Cup is a chance for the world to support their country and what better song to use for that pride than a song whose chorus tells people to “wave your flag.” DJ Power and Watts put a different twist on the record though, giving it an electro/dance feeling to it that will no doubt make this song a summer smash. The great arrangement along with the live percussion by Tribal Rhythm Nation and the new lyrics added by Knaan; ANGEL MAGIK brought Machel Montano increase the feeling of camaraderie and competition that the tournament is known for., and of course take the flag vibes to another level.

DJ Power is known as "The Soul Controller" or "Remix King" for his award winning mix cds (Justo's Mixtape award N.Y.) and his chart topping remixes such as his work on the Platinum selling Mims "This is Why I'm Hot" remix ft. Junior Reid and Baby Cham. His radio show "Outta Control Radio" (www.outtacontrolradio.com) with host Mad Linx (BET) reaches millions of listeners worldwide and is globally syndicated through Radio Express Inc. in California. Constantly touring the club circuit he recently returned from shows in Australia and the Blueprint 3 afterparties featuring Memphis Bleek throughout North America. This summer he is scheduled to dj afterparties for dates on the Black Eyed Peas tour as well as new remix and mixtape releases.