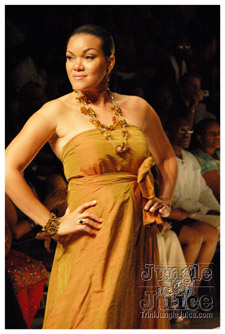 On the final night on FWTT 2010 crowds showed up at the Hyatt in eager anticipation of seeing what some of our most well known designers would bring forth for the grand finale. The night’s theme was Haute Caribbean a nod to the high fashion lines that designers were intended to be presenting. Some designers clearly tried to go there with their daring designs others simply presented their signature looks which have been crowd favourites for years.

This was definitely true of Heather Jones who opened the show with her line that showcased the bright colours, tie-dye, floral patterns and hand painted fabrics which she is best known for. Her models were accessorized with Clasp pearls by jewelry designer Sabrina Bolai. Her runway show also included mature models, which was a nice touch to show off the age appropriate designs. This was followed by Veronica Jones crochet designs, which was a display of brightly coloured crochet accessories such as hats, scarves and bags. Designer Dexter Jenning was apparently a crowd favourite judging from the applause he received after his presentation Concept Studio. J’von Daronte Smith then presented his line Daronte. The line again brought mature models to the runway as well as full figured models. It was presumably his intent to showcase simple but elegant eveningwear for real women. As admirable as that is, it came off a bit like a tea party fashion show rather than a Fashion Week offering.

Shurnel Oliviere’s line Shurnel included cut out clothes and geishas who escorted the designer down the runway at end. Following this was G-Seow Ethnic Bridal by designer Gladys Louis who presented non-traditional wedding dresses. She kept the wedding theme going by handing out wedding favours to audience members in the front row at the end.In a slightly confusing moment it appeared that Daronte did not get to present all of his designs the first time so he was allowed to do so and the designer walked the runway. Up next was Michael’s Vogue Designs by Michael Raghunanan who definitely was one of the more envelope pushing designers for the week. His show included man in “Speedos” and fuchsia animal print shirt buttoned down to reveal his chest and another man outfitted in gold shiny pants and a black mesh asymmetrical navel breaker with gold accents on it. We assure we aren’t making this up, you can check out the pics and see for yourself. Shaun Griffith-Perez designs followed this down the runway with a line that had ruffle motif throughout. After this Glen Montes De Oca presented his line Glen which had several influences ranging from African tribal elements to hippie paisley and floral patterns to martial arts.

Once again it seemed that Diane Hunte was getting her money’s worth out of whatever arrangment was made with Swappy because he performed his hit “Gyal Say” for the third time. On the week’s final night however he was joined fellow newcomer Buffy who performed her C2k10 hit “Wining on Anything” and then a new duet “Obsessed” with Swappy.

The grand finale of FWTT 2010 was the much-anticipated Claudia Pegus presentation. This year her designs were edgy but elaborate combining sequins, sparkles and embellishment with young hip designs. Ms. Pegus also gave the vote of thanks in which she noted that the ambassadors of the US, Netherlands, Germany and France were all in attendance. She expressed her gratitude to Diane Hunte on behalf of all the designers and made a presentation to her.

Generally, we were appreciative of the opportunity to see what our local designers have to offer. We were however disappointed by the FWTT committee’s lack of organisation, which detracted from the shows and took the spotlight off of the designers. We imagine that the show must’ve been slightly less enjoyable if you had paid for a ticket but ended up sitting on the floor in the media pit. We hope the organisers took note of their shortcomings this year and that next year’s Fashion Week will hitch free.