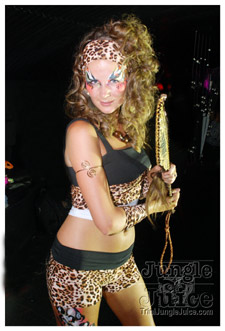 CROWD:
Tonight pulled a good crowd after a relatively slow start! By the time the drummers started the dancefloor was packed and peeps were anxious to see what performances Busspepper had in store. As usual Busspepper pulled a varied crowd and the Busspepper ladies always make that great effort to look hot. Only one issue and that was TOO MUCH MAN!!! lol.. should always be the other way round... the ladies should out number the guys!

VENUE/ACCESSIBILITY:
Tonight saw yet another new venue for Busspepper who are definitely keeping it fresh!!! Area Club is a large club under the arches in Vauxhall and just a stone's throw from Vauxhall tube. Not so easy if you were driving as most people had to park a little way away and walk to the venue. Area club was incredibly dark which definitely added to the vibes for the shows tonight with all the fog and special lighting! The venue consisted of a small VIP area upstairs where you could get food and two (2) bars downstairs, both however were pretty small. The dancefloor itself was pretty awkward until the stage was moved but after that cleared some space it worked really well and was full of non stop jamming!!

VIBES:
Tonight was a real mixture of vibes with some new and different artists performing and 2 band/section launches for Notting Hill carnival. First up was Dragon's Den winners 'Bass tone slap' beating out some serious rhythms to get the party started. Definitely a different touch from the usual Caribbean performances! Next up was Trini Posse UK with their Notting Hill presentation 'Caribbean sunset'...a colourful collection of pretty mas to bring Notting Hill carnival alive! We would have liked you on stage a little longer so we could really check out those sexy costumes though!! The second costume presentation for the night was Incognito's 'Shipwrecked in Africa'... bringing something different for the fun mas lovers with some hot leopard print outfits and sexy body paint! wild! The ladies were looking good :) If there is one thing about tonight, it definitely made us hyped for Notting Hill - bring it on!

On to the performances now and we had some great soulful soca from Nikisha getting everyone going with 'Roll My Bumper' and boy did she do that!!! Finally the host of the night, K-Marvel himself brought us his new single 'Pressure On Me', and his energy on the stage alone was enough to make sure the party kicked off in style. As usual on 'Caribbean timing' all this excitement meant it was at least 1am before it was time to jam!! Bass tone slap came on for a second time which broke up the party vibes a bit but the performance was still great! Keep on keeping it fresh Busspepper!!

FOOD/DRINKS:
Cash or cards accepted, phew because we needed drinks tonight!! Reasonable prices for drinks and a good selection...and as usual yummy Caribbean food from De Four caterers serving up all the favourites all night long!!! No complaints here!

SERVICE:
Don't get us wrong...the service at the door and at the bars was friendly but just a little slow. The first bar at the entrance seemed abnormally small for a venue of that size and the second bar could have done with more than 2 barmen at a time!! Someone needs to tell Area Club that Caribbean people like to drink and we don't stop!!!

COST/VALUE:
As we have come to expect with Busspepper they offer two advance options: either buy your tickets in advance for £10 online or you contact a committee member for guest list that runs all night at £15. Do neither and you will be faced with the old 'more at the door' scenario which could put a dent in yuh pocket! Once yuh organised your tix/list in advance the party with all these extra treats was definitely worth the cash!!

Big up to Trini Posse, Incognito, Nikisha, K-Marvel, Bass tone slap and Melysah for all the hard work that went on behind the scenes to make this a great event! Roll on Notting Hill!!!!