Koolant - The New Voice Of The Wailers 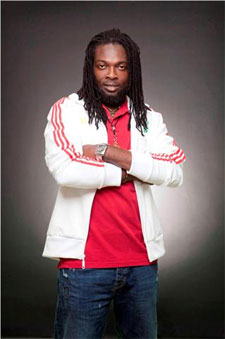 Friday, July 9; Kingston, Jamaica: It’s a sunny day in February and almost twelve-o-clock in the old St Thomas market. The day is scorching and the hustle and bustle is at its peak with housewives bargaining with traders trying to seek out the best deal. Koolant is sitting on a bench chatting with a vendor questioning whether he will get a chance to make it to the big stage as it has been years toiling from studio to studio. The vendor tells him, his time will come. Not two hours later his phone rings; it’s Father Tubby from King Tubbys Sound in England, who tells the artiste that his chance has come; The Wailers need a lead singer. Koolant smiles and looks to the heavens.  One of the worlds best known and longest touring Reggae bands has decided to give him a chance to audition to be their lead singer. Within the space of a month Koolant had passed his audition and is on stage with The Wailers performing to thousands.

Koolant’s discovery came soon after his cameo appearance in the film 'Made in JamaicaHis solo track, Rat Race, was getting airplay but the artiste who’d already performed at East Fest and several other major stage shows in Jamaica was yearning for his big break. His first recording was Keep the Faith, produced by Morgan Heritage, and was included on their 2002 album: Family & Friends Vol. 3. By then, Koolant had gained valuable experience from entering national song competitions and was writing his own material, inspired by reggae’s golden era.

Koolant, who recently performed to over 20,000 Wailers fans at the Wanee Festival in Fort Lauderdale on April 16, is not overwhelmed by the experience but amazed at the quick turn of events that have led him to The Wailers: “I feel good that I have this duty to continue the message that Bob Marley started and singing songs that I have been hearing from I was I child. I want to use this opportunity to spread the sounds of peace and love to the world. It’s amazing that one month I am sitting on a bench complaining about my career and then the next month I am in the US touring with The Wailers. I am most thankful."

The artiste says he always dreamed of reaching this level in his career: “It’s been a wonderful experience, singing with The Wailers because so many of Bob Marley’s songs are still relevant to what’s happening right now, they are of the times,” he continues. “Bob Marley was a prophet, and it’s a honor to be part of that. I put my whole self into spreading that message, and it can only help my own development as an artist and as a songwriter.”

Leader of the band, Aston ‘Family Man’ Barrett, believes that Koolant can carry on the tradition: “One good artiste can inspire another, Koolant loves the music and he has become a part of The Wailers learning from us as we learn from him. Koolant and Duane Stephenson are lead vocals for our new track for the United Nations World Food Program called A Step for Mankind and I think that song shows Koolant's vocal strength”.

A Step for Mankind sees the blending of Koolant’s deep yet smooth voice with the powerful lyrics and vocals of one of reggae music’s superstar, Duane Stephenson. Koolant is at home on the track which fits his tone and range perfectly. The importance of this song is amplified by the fact that this is Koolant’s first recorded track with The Wailers.

From one day going to studios trying to get his music out to standing in front of thousands spreading the message of peace and love and touring the world, Koolant sees himself truly blessed. Accompanying Koolant at the mic will be the other lead vocalist of The Wailers, Danglin, while they are backed by band leader, Aston “Family Man” Barrett on bass, Keith Sterling on keyboards, Aston Barrett Jr. On organ, Anthony Watson on drums, Audley Chisholm  on rhythm guitar along with Maria Smith and Racquel Hinds as backing vocalists.