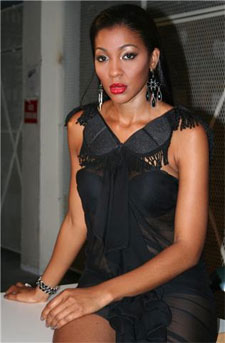 Kingston, Jamaica: July 9, 2010 ::  After ripping the runway at the recently concluded Pulse - Caribbean Fashion Week, plans are now in high gear for dancehall recording artiste D’Angel  to make good on her promise of delivering a memorable performance at the 2010 staging of Reggae Sumfest destined for Catherine Hall, Montego Bay. Though not her first time on the big stage, D’Angel is focused on leaving her imprint on the expected thousands in attendance on Dancehall Night.

“I plan to pull out all the stops, not just to go on stage and sing my songs.  I want to leave something memorable that people will talk about even after the festival has ended.”

Meanwhile D’Angel currently one of the campaign faces of telecom giants Digicel, last week kicked off their ‘Juss Buss’ Road Show alongside other acts. The ‘Bigger Better’ company now a staple across the Caribbean and Latin America also rolled out their first official musical compilation entitled ‘Next Generation’ which features several prominent entertainers including D’Angel with a song titled ‘New Generation’.

Equipped with several new singles and the premier of her scorching hot video for 'Come Over', the Dancehall fashionista is scheduled to perform at a number of events in the weeks ahead including: Manchester Fiesta, Little Ochi Seafood Festival and Radio Jamaica Group (RJR) 60th Anniversary among others.