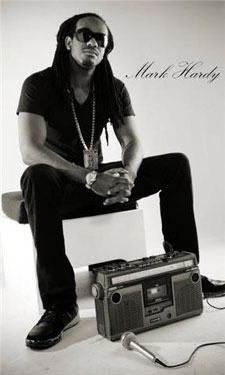 Port-Of-Spain (Sonique Solutions) –Trinidad and Tobago’s latest musical find announces his arrival with a brand spanking new track accompanied by a one of a kind music video.

Born Marcus Braveboy, the artiste known as Mark Hardy is currently making waves in the music industry with his newest musical release entitled, “Lyrical Apology”. After generating a buzz in territories such as France, New Zealand and North America, this locally bred singer, songwriter, producer and budding entertainment consultant is now definitely gaining a following in Trinidad and Tobago.

Considered by many as a “vocal chameleon” for his ability to sound like 2 or 3 different artistes on the same track, Mark Hardy is a true fusion artiste whose influences include Hip Hop, Dancehall, Soca, Rock and Reggae. Many would agree that both his sound and his image reflect the fusion of all those genres.

Mark embraced music from childhood and in later years as he grew more proficient and in more love with the art form he graced several performance stages including popular local competitions and showcases such as "12 and under" "Youth Fest" and "The International Soca Monarch Preliminaries".

Coming from a musical family, and having close ties within the entertainment fraternity have afforded Mark the necessary support and encouragement to pursue and prosper in his entertainment career especially with the release of his new single.

The track "Lyrical Apology” was produced locally by Giandre Diaz a.k.a “The Phoenix” while its corresponding music video was filmed and directed in Trinidad and New York by Michael Mooleedhar and Stephen Hadeed respectively. The video with its unique shots, camera angles and editing effects clearly distinguishes itself from the typical Caribbean video and gives an appropriate representation of the song and the artiste’s distinct qualities.

Mark Hardy refers to the music video filming process as an enjoyable, memorable learning experience. As the finished product enjoys rotation on local airwaves, he has already utilized the internet the take the fusion sound and images of Lyrical Apology to the worldwide audience via websites such as YouTube, Facebook and Twitter.

The YouTube link for the Lyrical Apology Music Video:

In addition to music and production, this jack of all trades is also a final year law student. He aspires to combine his formal education and his experience in artiste management and music licensing together with his passion for entertainment in order to do his part in raising the local and regional industry to a much higher standard of operation.

He is in the process of starting his own online marketing company, specializing in social networking management and the promotion of artistes, producers and music labels.

Possessing an optimistic attitude, a creative mind and a willingness to learn, grow and invest in himself, Mark Hardy is on his way to becoming a household name.

Armed with his special brand of melodious fusion music he is currently positioning himself to be an ambassador for Caribbean talent.

When asked about his already growing fan base, Hardy replied, “To all fans of Mark Hardy and potential fans of Mark Hardy, thank you for your support, I really appreciate it from the heart. I've wanted to do this since I was kid and although my musical journey took a bit of a detour, I'm happy to be back doing what I love and I'm going to continue to keep making good music for you to enjoy. Look out more some mad collaborations in the future as well... Blessings!!!”