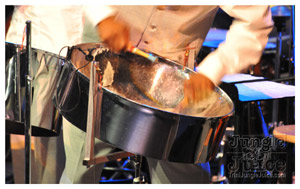 CROWD:
The turnout for this event was almost overwhelming.  The pre-show was packed and bustling with more of a mature crowd.  Some even brought along their children to enjoy the evening's festivities.  It was quite warm and balmy for the second to last day of Spring so everyone was fashionably dressed in their summer attire.  Amongst the patrons having a grand time we spotted Superstar Mogul P. Diddy's mother, Janice Combs and several other Caribbean dignitaries.

VENUE/ACCESSIBILITY:
At the legendary Frederick P. Rose Hall the Atrium was spacious and perfect for the pre show featuring ceiling to floor windows with a stunning view of Central Park.

VIBES:
This year the show was hosted by former Miss Universe, Wendy Fitzwilliam.  Trumpeter Etienne Charles with steel pan composer-arranger Andre White, Jazz pannist Leon Foster Thomas, steel pan musician Freddy Harris Jr., drummer Brannen Temple, saxophonist Jacques Schwarz-Bart, pianist Sullivan fortner Jr. and bassist Ben Williams took to the stage much to the crowd's delight.  The evening's all star cast also featured the popular Rapso artists 3 Canal and the artistic brilliance of Carnival Designer Brian McFarlane. There was no question that the presentation this year would be breathtaking.  The stage was set for us all to experience FOLKLORE.

Of course in true West Indian fashion, folks were still lined up at the mini bar getting their drink on instead of settling down in their seats and as a consequence missed the introduction of the show! 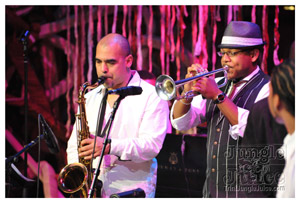 Now I did mention breathtaking right?  The set design reflected the Devil's Wood Yard.  The representation of the Silk cotton tree was absolutely stunning!  There were oohh's and ahh's throughout the theatre as everyone filied into their seats.

The show told a tale of Folklore in a way we never expected with exceptional muscial arrangement and costume presentations.  From the La Diablesse and the Soucouyant to the Douens and the marriage of Papa Bois and Mama D'Lo.  It was simply brilliant!!!

Of course 3 Canal did not disappoint with their jazz arrangement of the classics "Blue", "Salt" and "Morning Neighbour."

FOOD/DRINKS:
Well hands down the most talked about at the pre show was the food!  Without a doubt Negril Village is top notch.  The line was long for days!  Next up was Brooklyn's most popular "spot", Sugarcane.  The presentation alone made you want to try whatever it was even if you weren't hungry!  Delicious!  That line went on forever also. If I'm not mistaken almost everyone was gulity of returning to both lines for seconds and thirds!  Allan's Bakery was another popular pitstop.  I think it may have been the mini red velvet cupcakes.  Let's just say I had to put in an extra half hour on the dreaded treadmill.

There were a few "mini" cash bars with wine and vodka etc but the line for that was insane and hence there weren't too many happy campers about that.  But hey we weren't at the club!  I'm just saying.

Abstract Entertainment has once again produced a classy evening of Caribbean culture.  Thank you for accomodating us.  We appreciate it and look forward to the next installment of Pan Jazz with bated breath.