Evolution Gets Charged Up 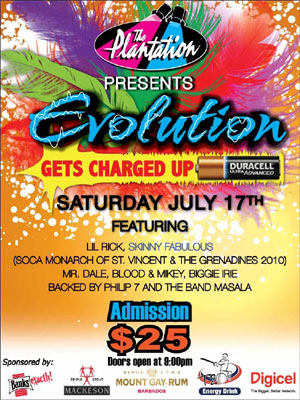 Three-time Vincy soca prince Skinny Fabulous will be one of the featured performers in the line up of The Evolution Show at The Plantation Garden Theatre this Saturday night.

Just two weeks ago he put down a riveting performance during Vincy Mas’ to take the Vincy Soca Monarch crown for the third time in a row. His title winning track, Charge Up (Duracell) has emerged as a party anthem in Barbados and at carnivals worldwide.

With the 2010 Crop Over season now in full swing, partyers have been asking to see the vibrant entertainer in live and electrifying colour. So before leaving on international tour, Skinny Fabulous is coming fully charged to emit his brand of soca energy on the Bajan partying masses.

In addition to The Evolution Show cast members of Lil’ Rick and Biggie Irie, this weekend’s party will be an energising musical mix, featuring Mr. Dale, Blood and Mikey backed by Philip 7 the band Masala to keep the energy levels high. The first in the Evolution series of shows received rave reviews and this edition is not to be missed.