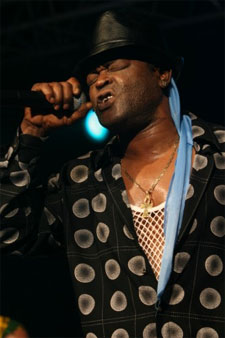 Death is the bitter sweet gift of life. We all know it's coming, although for most it appears unannounced. The irony of it all is that we spend a life time preparing to see the gates of Zion, yet our departure is very rarely celebrated with joy.

I (Garfield "Chin" Bourne") was not a personal friend of Sugar Minott but a huge fan of his music and unlimited contributions to the early stages of the dancehall and sound system culture. So, celebrating Sugar's life may be a little bit easier for me to do than those who were the closest to him. I refuse to be saddened and want to enjoy Sugar's life through the works of art he has left behind. With more than 60 albums and tons of timeless hits like "Mr. DC," "Herbsman Hustling," "Vanity," "Never Gonna Give up Jah," "Good Thing Going" and so many others, Sugar Minott has a catalogue that rivals some of Jamaica's top stars. Not only do we have Sugar's music to live through, we have the careers of the many artists he either influenced or discovered.

My dearest memory of Sugar Minott will undoubtly be his performance at "REEEWIND" last year. Sugar was not billed for the show. In fact, he just happened to be in town and called us for some passes for the event. At the time, we were under pressure because Luciano was denied entry to the United States just before the show. Hearing Sugar's voice on the line was like a breath of fresh air. Irish's father and Sugar went way back. So, Irish worked out the business end of it and we booked him for the show.

Sugar Minott's performance at the show was nothing short of flawless. Our last minute added guest literally brought the house down with his hits. The crowd was amazed!! Sugar Minott was the talk in the streets for weeks and he was so humble. He just loved doing his thing! They just don't make singers like Sugar Minott anymore! Today, it's all about the money and very little talent.

Although this great hero, better yet "Godfather of Dancehall Music," has passed on, he will leave behind an impeccable legacy and great ethics. Many of today's artists still have a lot to learn. The passing of Sugar Minott makes me wonder what the future of Reggae music will be like. To view Irish and Chin's tribute to Sugar Minott, which includes snippets of his stellar performance at "Reeewind" in October 2009 (his last big show), click here (http://www.irishandchin.com) or on the photo. Rest in Peace Sugar Minott. You may be gone but will never be forgotten!