Dr. Jay is Set to Paint the Town WHITE This Weekend 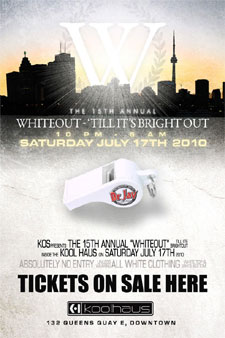 Toronto’s favourite pre-carnival tradition returns this Saturday: Dr. Jay’s WHITEOUT. This trendsetting Caribbean event is a highly anticipated precursor to the city’s August long weekend festivities. For the fifteenth consecutive year, partygoers are expected to don white attire all night long until sunrise as they dance to the best in Caribbean soca music.

Whiteout was started by Toronto-based DJ Dr. Jay de Soca Prince in 1995. Patrons must dress in white clothing from head to toe in order to obtain entry, creating a glow in the dark effect under black light. The look is reminiscent of Toronto itself under severe snowy conditions, known locally as a “Whiteout”. The concept has gone on to be imitated internationally by carnival event promoters throughout the West Indies, the United States and the United Kingdom among other places. However, Dr. Jay prides himself on strict enforcement of the all-white dress code in a way that others do not. Each year, WHITEOUT strives to break new boundaries, be it creative venues such as Medieval Times dinner theatre in 2005 or surprise appearances from the likes of hip hop phenomenon Drake in 2009.

In 2010, the event will feature live performances from a high-energy cast of artistes, live and direct from Trinidad and Tobago. Among them is legendary saxophonist and band leader Roy Cape who, earlier this year, was fêted for 50 years in the Caribbean music business. His band, The Roy Cape All-Stars, will provide the soundtrack of booming bass, tweeting treble and piercing brass for performances by Blaxx, Olatunji Yearwood, Rita Jones, Zan and Umi Marcano.

In contrast to Roy Cape, Umi Marcano is the youngest performer on the bill. He says he counts it an honour to be included in the long standing tradition. “I heard it’s the best and Dr. Jay gives you the five star treatment,” said Marcano .“ It’s the best feeling in the world coming [to Canada] for the very first time to perform for my fans across the oceans. The member of Machel Montano’s HD family represents a new generation in soca music fusing R&B style vocals and dance with Caribbean Soca rhythms for a hybrid groovy style that has quickly gained popularity among youth. The Kingdom of Soca DJs (KOS) will keep the party going till 6 a.m. The night promises to raise the spirits of the young and the young-at-heart alike.

If you have never experienced WHITEOUT, be sure to check it out this Saturday July 17, 2010 10 p.m. – 6 a.m.
“Koolhaus” inside the Guverment Entertainment Complex 1 Lower Jarvis Street, Toronto