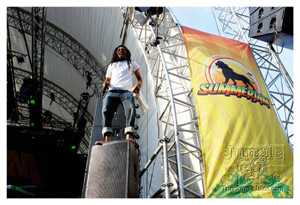 It's kind of hard to believe that Summerjam is already here. Seems like just yesterday we were here enjoying one of the best music festivals in Europe. This is the 25th edition and the hype surrounding these three days is as real as the jerk chicken leg I destroyed on my entry to the festival. You see, it's like a ritual, every year the same motion. As soon as I enter the festival, its direct advancement to Jah T, the wickedest jerk chicken with rice and peas on this side of the globe. Finger suckin' good and now we ready. Summerjam 25th Anniversary and its time to full-joy 3 days of sheer ecstasy. Seriously!

Friday, first day, its 4pm and hot like deep in a volcano belly. Quick, quick shirt off and that feeling better. Now, I fitting in nicely with about 80% of the thousands of people here. Too hot for clothing, but not that we mind, no not at all. So I walking around the festival ground, sweating like pipes in my body buss open and taking in the vibe, the Summerjam vibe. Seriously, there are no words to describe how good you feel being at this festival. Really its the perfect escape from everything. A kaleidoscope of people, literally! As i strolled around, running into friends, familiar faces, regulars, die hards, its clear that this year there's way more people here than last year. People were everywhere. Camping grounds were jam-packed, people lying by the water, in the water, just about everywhere people and more people. Smiles, hellos, oh yes the friendly, tolerant, here to have a good time vibe is definitely present. Nice! 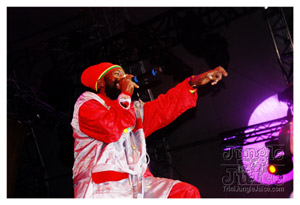 Concerning the acts, basically there are two stages, the red stage and the green stage. On both stages artists perform from around 3pm until around midnight, then its off to the huge tent for the dancehall area where soundsystems shine and very often an artist would take to the stage adding an extra dose of excitement to the thing. On the Friday line-up we have on the red stage Conadoor & Soulfire Band, Ohrbooten, Mono & Nikitaman, Delle, Nneka and Gentleman & The Evolution Band. While on the green stage Uwe Banton ft. Ganjaman, Martin Jondo, Jah Mason, Lutan Fyah, Fanton Mojah, Don Carlos and Inner Circle were the acts to grace this stage.  Most of the performances I saw were extremely full of energy and it seemed like artists/bands seriously enjoyed every second of their performance. Singers lost in their own words, musicians reacting to every key played, and back up singers grooving that much more. The crowd showed love and then some. Screaming, cheering, jumping, eyes fixed forward not wanting to miss not even a second. Yup, the Summerjam magic took over. Personally, performances that really stood out to me were those of Nneka and Gentleman. The voice and vibe of Nneka captivates. Great music and this young lady knows how to perform. The pride and joy of Germany; Gentleman did his thing but with something extra causing major damage. His act was the closing act on the red stage and a fitting end to the days stage entertainment.

On the green stage Fanton Mojah was master! Amazing how clean and sharp Fanton's live performance is. Golden voice and a real energy monster who can spring extremely freakin' high. Seriously, the best performance of the day. Inner Circle Closed out the green stage and they did a marvelous job. Hit after hit that appealed mostly to the adults at the festival. I never saw these guys live before so for me it was unforgettable. Say what you like, but there's something magical about experiencing an artist live, doing songs you grew up loving, listening too mostly on repeat. For the people like me still standing, still sweating from the heat, full pumped with liquids, in my case beer, it was now time to party the night away in the dancehall tent. Honestly, if I wasn't already a bit tipsy from all the alcoholic cooling I've been ingesting, I don't think I would have been able to withstand the dancehall tent. It was HOOOOOOOOOOOT! Felt like 50 degrees in that mother. It was so hot, water (well i told myself it was water anyway) was dripping from the roof of the tent. YET, the vibes were mad. The place was full, full, full. Thousands and thousands of insane people having a time. Soca Twins played a nice soca set, injecting their energy into an already charged massive and raising the energy for DJ Mike One who gave a mad performance, showing off his dagger-skills in the process. I then stayed for Lord Kossity and during Kingstone's set me and my crew succumbed to the heat and alcohol combination. Bed and shower called, so with that one the first day of Summerjam was finished, surmounted into a mega-WOW! 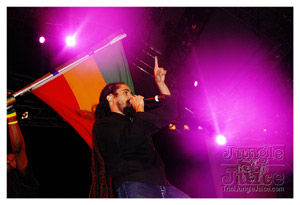 Saturday! Day two began in the same way the first day began, only this time I had two plates of jerk chicken with rice and peas, washed down with an ice cold red stripe. A nice stroll around the festival checking out the different stalls and special areas like the cocktail bar, different food joints, chill spots where most of the "hippies" congregated doing hippy stuff and ofcourse the special areas dedicated to world cup football viewing. Yesterday I saw Holland kick out my Brazilian team and today due to a serious rain storm we were stuck at the hotel and had to take in the German-Argentina game there and didn't make it to the festival ground until after the game. The rains were a blessing though because it cooled off the place nicely and dealing with the day was now very doable. I can't say enough about the vibe at this festival. High on music and all about feeling good and sharing that with the rest. Marvelous! Performances today stayed in the same general sphere of being of a very very high calibre and the performers were feeling the crowd, the festival, the weather, just absorbing every single part of Summerjam and giving back that same energy through their music. On the red stage Julian Marley was amazing. So cool and collected and don't even ask about the voice! Bob was surely smiling, bumping his head to this performance from up on high. Capleton was also mad! More energy than usual so you could just imagine how much jumping around the stage there was. Crazzzzyyyyyy! However, this Summerjam was to display two acts that everyone couldn't wait to see and one of them was Nas together with Damian "Junior Gong" Marley. Everyone, press and the public alike were tripping over themselves to claim the best location for their performance. And what a performance! These two artists mesh so seamlessly together, as if they been performing together for years and years. This has easily been one of the highlights of my life and something I would never ever forget as I'm sure it also was for all who witnessed this monster performance. A full show that contained everything you could possibly want. This was the closing performance for the red stage and a very fitting end to another amazing day. On the green stage, TOK killed it much to the pleasure of the screaming, crying, hysterical girls in the front row who were literally climbing over each other to try and get at the dancehall boy-band superstars. Mr. Vegas who never fails to impress brought his triple-A game. Say what you want about him but Vegas is one of the best live performers on the dancehall scene and Summerjam showed him nothing but love. What a day of live performances! Musical heaven!  Later that night in the dancehall tent, Sentinel Sound, Pow Pow Movement and the god-father David Rodigan blazed it at a stupendous pace to a once again overly zealous, jam packed tent! One more day to go and all eyes would be set to the red stage because the one and only Machel Monatno HD would be performing. Soca at Summerjam for the first time ever! 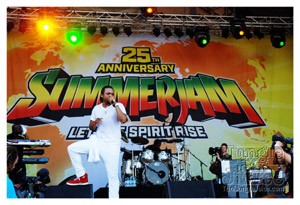 The line-up on Sunday is usually very chill. Relaxed bands and artists to sooth you toward the grand finale. Max Herre on the green stage and Toots & The Maytals on the red stage would be the final acts and then the traditional fireworks display. But before we get there Machel Montano HD would create a new chapter to Summerjam, never before written. Of course we had our fill of jerk chicken and all condiments, a few red stripes, chilled by the lake with some peeps, took in some performances and even found time to make some pics for this TJJ gallery :-). Then I cutout and headed for the red stage. Securing a good spot was essential because history was about to be made and I wanted to be right up in the mix in true Trini style. The performance before Machel was by Sinsemelia and these guys rocked hard. Thousands of people were in from the stage literally going crazy, but as soon as their performance was over everybody was gone and it was like a ghost town. Five minutes before Machel should start and the media along with a few hundred soca lover with flags from various countries are the only people on the field. I think to myself "noooooooo, finally we have soca and nobody's here?" Anyway, Mr. Machel came out in crisp red and white and I swear, in a matter of minutes the hordes returned and the masses engulfed the entire terrain. Priceless! Machel was on point and it was clear to see that he fully understood what it meant to be standing at Summerjam as a soca artist, the true soca ambassador. How fitting?! Energy soaring to the sky, flags, hands, voices, shirts, everything in the air in glorious madness. For people like me who live on this side of Europe and involved with pushing our music and culture, days like these are very few and in between. Its impossible to relay to you what something like this could mean for soca music and its acceptance on a wider scale. Not being biased, and you can ask anyone who witnessed all three days of the festival; Machel's performance along with Farmer Nappy and Patrice Roberts was the best for the entire weekend and one of the best performances ever at Summerjam. D-One said so! I spoke to many people and even some of my friends who were before a bit skeptical about soca music, later admitted while covered in sweat and still breathing hard from jumping after Machel's performance, that they acquired a new-found love for soca music. Beautiful! 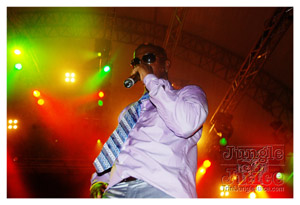 We were at the red stage enjoying the last performance of Toots & The Maytals, feeling great in the cool evening breeze, fully contented and a bit saddened. Sad because the weekend was slowly winding to an end meaning that the magic would soon be over and then its back to the grind and reality of everyday life. Still we had some time and weren't quite there yet. The last tune was finished and then the sky began to light up with bursts of colour. Slowly at first, then growing into one of the sickest fireworks spectacle I have ever seen. The perfect way to end the perfect weekend of great music and extraordinary talent. TJJ is proud to be the ones to bring you close to such an event especially since it means so much for our culture. Give thanks for the blessings straight! Every year i say this and would say it again, those of you who have never been to Summerjam, start planning for 2011. It's an experience of a lifetime, Trust me!