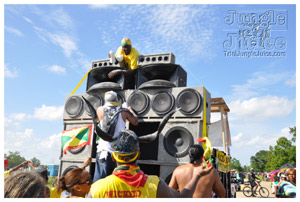 It's Day 4, and the final day of our Houston Carnival 2010 experience. With the sun in it's full glory, it's time to hit the park for the Parade of the Bands and After Concert.

CROWD:
There was always a steady inflow of patrons. At the end of the night, the capacity of the venue was pretty much optimized. Being an outdoor parade, most women came out clad in shorts and strap tops. The occasional person could be seen flaunting a dress or some blue jeans. The age demographic was quite broad ... from toddlers go right up! This was an event for everyone!

VENUE/ACCESSIBILITY:
The venue was big and spacious. Then again ... so is everything in Houston :-) This park brought with it vast spans of green grass, trees towering in the distance and clear blue skies. The weather was quite promising as well offering brilliant sunshine all day long, which was not only essential for the festival but a blessing as well. Over the past couple of days Houston has definitely seen its fair share of rain.

VIBES:
The Parade of the Bands carried its own entertainment and excitement but was limited only to those who participated in the actual Jump Up. Later on however, the live on stage performances surely stirred up a frenzy. NYC's Wassy promoted love and unity and condemned all those who were trying to mash up a good thing. Long live Houston' Caribfest was the message. Rupee also put down quite an electrifying performance later on and was back by the Request Band. From the looks of things, the Request Band looks like they can hold their own as well. They also did a great job in terms of entertaining the large crowd present. 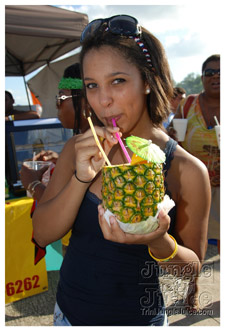 FOOD/DRINKS:
There were tons of eats and drinks readily available from the numerous vendors on location. So much so that it was difficult to choose where to go and what to eat. Now to combat the heat there were all sort, sizes and flavours of snow cones, gigantic lemonades, margaritas and also some fruit slushy treats served in pineapple shells. It definitely looked enticing! Popular foods ranged from jerk to Jamaican patties, large turkey legs, potato wedges and even roti. If your appetite felt for something ... you could find it!

SERVICE:
Service ... humm! Well like the Original Lime Flavour put it ... "We're rolling with Houston's royalty" and also had a BESS driver (thanks Rea) so yes our treatment was nothing short of first class.  Oh, not to mention ... TJJ even got to shortly roll around in one of the few Golf Carts present. Special request ... next year we want a special TJJ 6 seater Cart guys ... lol.